Eichler et al.: Half of recent warming was solar

In this dose of peer-reviewed skeptical climatological literature, we follow Climate Research News. The blog was intrigued by a new article in Geophysical Research Letters that was accepted on Friday, December 5th.

Recall that the Siberian Altai Mountains are found at the intersection of Russia, China, Mongolia, and Kazakhstan. 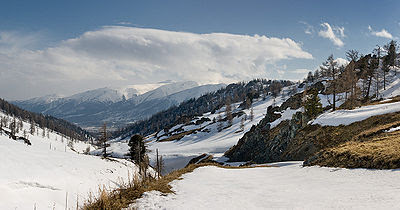 The authors looked at 750 years worth of the local ice core, especially the oxygen isotope. They claim to have found a very strong correlation between the concentration of this isotope (i.e. temperature) on one side and the known solar activity in the epoch 1250-1850. Their data seem to be precise enough to determine the lag, about 10-30 years. It takes some time for the climate to respond to the solar changes.

It seems that they also have data to claim that the correlation gets less precise after 1850. They attribute the deviation to CO2 and by comparing the magnitude of the forcings, they conclude that "Our results are in agreement with studies based on NH temperature reconstructions [Scafetta et al., 2007] revealing that only up to approximately 50% of the observed global warming in the last 100 years can be explained by the Sun."


Well, the word "only" is somewhat cute in comparison with the "mainstream" fashionable ideology. The IPCC said that they saw a 90% probability that "most" of the recent warming was man-made. The present paper would reduce this figure, 90%, to less than 50% because the Sun itself is responsible for 1/2 of the warming and not the whole 50% of the warming could have been caused by CO2 because there are other effects, too.
Note that if 0.3 °C or 0.4 °C of warming in the 20th century was due to the increasing CO2 levels, the climate sensitivity is decisively smaller than 1 °C. At any rate, the expected 21st century warming due to CO2 would be another 0.3-0.4 °C (the effect of newer CO2 molecules is slowing down for higher concentrations), and this time, if the solar activity contributes with the opposite sign, these two effects could cancel. Even if you try to stretch these numbers a little bit - but not unrealistically - you have to become sure that the participants of the Poznań conference are lunatics. By the way, the participants just heard that air-conditioners cause global warming: another trace gas that is 15,000 times more potent than CO2. Well, be sure, once you start to study trace gases, you will have to deal with millions of similar things.
Finally, I didn't go there: the transportation would be too difficult for the infinitesimal effect that my presence would probably have.

I just read the November 2008 issue of the Laissez Faire magazine. It has this funny story about the European candle manufacturers. They sent the European Commission a petition, originally penned by Frédéric Bastiat in 1845:

... We are suffering from the ruinous competition of a rival who apparently works under conditions so far superior to our own for the production of light that he is flooding the domestic market with it at an incredibly low price; for the moment he appears, our sales cease, all the consumers turn to him, and a branch of French industry whose ramifications are innumerable is all at once reduced to complete stagnation. This rival, which is none other than the sun, is waging war on us so mercilessly ...

Of course, the European Union agreed and imposed a new tax on the big competitor. ;-)

Well, it is true that China is not a full-fledged market economy. But if you don't care about its internal flows of money, and the candle subsidies, China is "just another company" and "just another competitor". Obviously, the subsidies must be compensated by some other, profitable products. The right solution to deal with such competitors is not to become a protectionist socialist economy ourselves!
Luboš Motl v 10:08 AM
Share