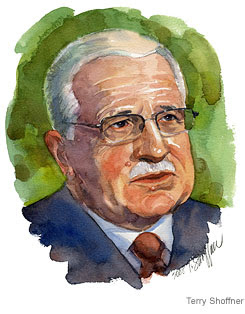 "I do not like the way they forced it", Klaus said shortly after an agreement was announced in Brussels.

He also claimed that his French counterpart Nicolas Sarkozy had "pushed" the deal so that it would not be left when the Czech Republic takes over the EU presidency from France on January 1.


"This is scandalous," he said. "We should have been able to discuss it during our presidency, to force it now is not very good."

"Environmental issues are a luxury good," Klaus added. "Now we have to tighten our belt and to cut the luxury."

Related: Coldest start of winter in Britain since 1976
Related: Computers cause global warming (0.3 °C of it)

Global climate issues "are a silly luxury good," he repeated.

Czech environmentalists had expressed fears that an EU agreement on how to tackle global warming would never have been concluded during the six-month Czech presidency of the bloc because of Klaus's views.

But Deputy Prime Minister Alexander Vondra said this week that Klaus's opinions were not shared by the government and would not alter EU developments.

"It is a question of ideology: one believes more, one believes less... there are some commitments which we have agreed to in 2007 and nobody would seek to change that," he said.

By the way, President Klaus also criticized the attempts of the EU to revise the rules about the composition of the European Commissions until 2014 to attract the Irish voters: the ratifications in the other countries would become invalid and would have to start from the scratch if the treaty were modified in this way.
Luboš Motl v 4:15 PM
Share