Last night, I was honored to be invited (with a friend) to an X-mas "party" of CEP (Center for Economics and Politics), a libertarian think tank of Czech president Václav Klaus and Petr Mach who may be just establishing a new political (libertarian euroskeptical) party (plus a finite set of others).

It was a pleasant experience. At least after some time, it is fun to see many of the very famous faces from the world of the Czech culture and politics again. Their number could have been slightly lower than a year ago but it was arguably above 50% of the last year's number, indicating that after the velvet Klaus-ODS divorce, you shouldn't underestimate the new party that could import lots of voters (and politicians) from ODS (and other places).

While I didn't have any gift for the president, I actually received one: what a painful combination. It was the new issue of Euro (euro.cz), a magazine targeting Czech managers. There's a lot of mainstream "gossip" from the world of these people: the managers like to read it. The magazine treats businessmen as rock stars and tells you stories from their (and the economy's) life.

You wouldn't be certain what they think about Klaus' struggle against the global warming religion, the Lisbon treaty, and similar fashionable tendencies. You might even guess that a magazine with such a Euro name is going to endorse the centralistic Euronaive position. Well, you would be wrong.

It turns out that the magazine totally supports Klaus, and there are many articles in this issue to demonstrate my assertion. The picture above - on the cover - shows Klaus as a knight who finds it "necessary to fight against everyone, if you own the truth" or simply "with truth against everybody", a slogan of a top Czechoslovak politician from the 1920s, Mr Karel Kramář, that I am currently unable to translate in a more faithful and readable way. The picture looks more respectful than the Prague Castle Batman in The Economist (or other places) and I assure you that the text of the articles shows a similar difference in the attitude.

That's pretty cute because the Western media that I normally hear about - including the business media - often like to join the irrational witch hunts and they endorse the "only" politically correct line. Well, it works differently here and if you're doing business in Czechia or a few other places of the New Europe, you may actually be expected to denounce some of the recent anti-business extempores of people like Nicolas Sarkozy!

(Incidentally, Sarkozy has attacked the Czech president for his refusal to fly the EU flag above the Prague Castle, the symbol of Czech statehood, which Klaus is known not to intend. It seems that Sarkozy is slowly losing his mind. Imagine that he asked the U.S. president to obediently fly the EU, French, or the U.N. flag above the White House. I can't believe Sarkozy is serious. Has he learned something about the history, the meaning of countries' sovereignty, and the wars that often erupt when it is breached? Mr Sarkozy, do you seriously think that according to the existing international law, it is the French president, and not the Czech president, who determines the flags flying above the historical home to the Czech kings?) 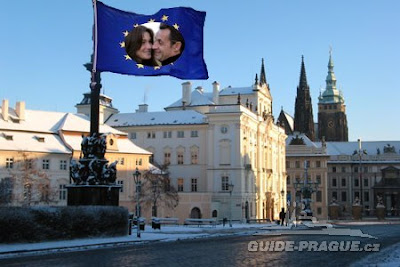 We love our EU royal pair, Carla and Nicolas.

Nicolas, you could find out that you're not only against the Czechs but also some Britons and many other nations.

Václav Klaus mentioned that I was slightly left-wing. Of course, I didn't have a sufficient level of testosterone at that moment to argue with the president that I was more right-wing than he was - even though I probably am! :-). Instead, I understood the criticism as a deserved one in the context of my newspaper article supporting the (then) $700 billion bailout. (If you're completely missing the rules of the game, let me explain that saying that someone is left-wing is surely not a compliment!) :-)

Funny but not realistic: latex Sarkozy conspires against latex Klaus during a dinner

You know, I surely didn't support any (or escalating) interventions to the economy. Also, I supported the bailout becauseBut again, I understand where the statements (by Václav Klaus or some beloved members of the TRF community) that my comments about this issue were Keynesian or left-wing in character come from, and I am not going to be insulted. ;-)
Luboš Motl v 11:03 AM
Share