Another person proves that the catastrophic acceleration of the global warming isn't slowing down. 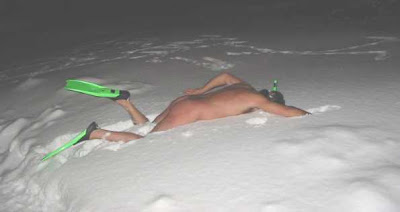 Alcohol may have been involved. Thanks to Bob Ferguson! ;-)


Schmidt and the cool year 2008
By the way, as it is becoming increasingly more likely that 2008 is going to be the coldest year since 2000, Gavin Schmidt is scared to death that people could realize that the years of the 21st century saw mostly cooling. So he has emitted a huge amount of fog and emphasized that the new century began after December 31th, 1999 (and not on January 1st, 2001), because that was the only time when he was drunk like a pig (a statement that I, frankly speaking, don't believe).


Does global warming increase variations?
But there is something more important in the discussion thread of this article by Schmidt. Many GW alarmists who come to this blog (and others) - such as Alexander Ač - like to say that global warming is going to increase temperature variations. Well, if you really love consensus science as you understand it - i.e. a blind parroting of the most left-wing hacks and cranks pretending to be top scientists - you should realize that the consensus science actually says something completely different than you think.
As you know, Gavin Schmidt of NASA defines the consensus because he is the spokesperson for the very holy James Hansen - the Prophet who received $250,000 from Theresa Ketchup Heinz Kerry herself. And he says the following about the variations:

[Response: I’m not quite sure where the idea that AGW implies more “varied” climate comes from. It certainly isn’t a general rule, and I’m not really sure that I know it to be a fact even in specific cases. There is certainly no indication from the models that variability (about the trend) in global mean temperature should change. - gavin]

You have heard the holy word. Amen!

Of course, Schmidt is right about this point, after a very long time. Because warming, if it existed, would be faster near the poles, largely because the ice-albedo feedback, the spatial pole-equator differences would shrink rather than expand. And there is no reason for daily or annual variations to increase because the greenhouse effect works throughout the day and throughout the year - because the Earth always emits the IR radiation and the atmosphere can always absorb it.

Gavin Schmidt has provided his readers with some sophisticated but mysterious religious tricks to explain that his holy words don't contradict the words from another Holy Prophet, namely al-Gore, who said that weather would be more extreme. In Schmidt's opinion, extremes have nothing to do with variations. Who could have thought! :-) Unless you expect very non-monotonic changes to the statistical distributions (changes with many wiggles), that would seem unjustifiable, increasing extremes of any quantity Y(t) inevitably means that the variations of Y must increase, too.
These crackpots are getting so entangled in their exploding and increasing lies that they are bound to be suffocated by them pretty soon.
Luboš Motl v 10:11 AM
Share