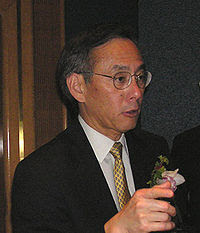 Steven Chu, the 1997 physics Nobel prize winner for laser cooling, is likely to be picked by Barack Obama as the new secretary of energy: CNN, Google News.

This is surely a bold - or crazy - experimental move because Chu's political experience is probably negligibly small. It may backfire.

But I admit, picking a famous experimental physicist in politics is the kind of experiments that I find intriguing. Expect lasers everywhere. And the guys from AMO physics may perhaps expect increasing grants from the Department of Energy (DoE). ;-)

When it comes to climate change, Steven Chu is a nutcase just like everyone else who could have been considered by Obama. If you ask me whether I am surprised that the new energy secretary is going to be an alarmist nutcase, the answer is No, I am not surprised. ;-) Still, I wish America that he will be forced to realize that this insane postmodern religion is not the bulk of things he needs to do his job.