This Friday was a nice day. I went to Prague to see an enthusiastic talk of a former colleague of mine, MG, and to spend some pleasant time with him or her, but if you allow, we will keep the private and public things separated.

Among the public events, amusingly enough, I met a Czech X Factor finalist, Ms Kamila Nývltová (search), in the subway. Some regular readers will surely remember this young woman.

I didn't want to create a scandal so I didn't talk to her in the crowded wagon: no one else did either - the privacy of stars and starlets seems to be protected much more than I expected.


But I followed her on Florenc, another station, to be sure it was her, and asked her whether she was Miss Kleopatra. She smiled, answered Yes with her voice that made the question about her identity indisputable. I told her I was Tutankhamun, not realizing that he was born 1,300 (rather than 17) years before Kleopatra :-), and she didn't need any help with her luggage. Fun encounter.

Czech president Václav Klaus's meetings on Friday were less pleasant. His team made a substantial mistake of inviting Danny the Red, a far-left French-German provocateur and revolutionary from the 1968 student barricades, to the Prague Castle. 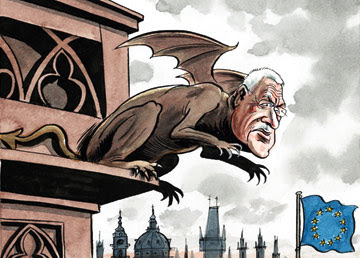 The Economist's article and picture about Václav Klaus suggests that the paper is addressed to the fans of Harry Potter and to younger fans of Batman rather than adults.

Daniel Cohn-Bendit has prepared a multi-level provocation: see Monster and Critics. He gave the European flag to Klaus as a gift - it's a well-known fact that Klaus won't fly it above the Prague Castle. Then he said that he was not interested in the host's (Klaus's) opinions but he cared what he would do to satisfy folks like the Cohn-Bandit.

More aggressively, he asked who was paying for Declan Ganley, suggesting mysterious financial links with Klaus himself etc. Well, comrade Bandit, the fact that you are a green parasite paid from our (European citizens') taxes doesn't mean that other people have to belong to the same class. Ganley is a self-made businessman (telecommunications for the military, forests, aluminum, and other sectors).

President Klaus asked Hans-Gert Poettering for the right not to answer these would-be questions from Danny the Red but Poettering rejected the request. Let me tell you, if the European Union meant that some far-left idiots who have been voted by no one in the Czech Republic should get the right to freely oxidate and insult the head of our state at the very symbol of the Czech statehood, a castle that has enjoyed a very special and serious status for many centuries, I would prefer to leave the EU as soon as possible.

You know, the Prague Castle doesn't belong to some screwed French communist revolutionaries and it never will: it is not a Paris barricade. And what the Czech president's acts will look like will always depend on his opinions, not the opinions of some green imbeciles, because this is how it works in democracy and this is why we have a president in the first place.

Finally, today, Václav Klaus resigned as the honorary chairman of ODS, the Civic Democratic Party that he founded in the early 1990s, because the centrist and ideologically vacuous, lobbyists-oriented politics that the current leadership is doing - including Merkel-like support for the global warming socialism and other fashionable policies - became too big a liability for the head of the state (and probably for the party, too): The Earth Times, video in Czech. By the way, later, Václav Klaus congratulated prime minister Topolánek to his renewed mandate as the ODS chairman. The ODS-Klaus split was way more elegant and peaceful than the otherwise analogous social democratic ČSSD-Zeman split years earlier: the difference is probably arising from different players.

Incidentally, RSS MSU released their November data - almost no change of the global temperature anomaly, so I decided that a special article would be too boring in this case. The year 2008 is set to become the coldest year in the 21st century so far and in one month, we will definitely return to the question how the year 2008 looked like.
Luboš Motl v 1:46 PM
Share