The Middle East issues became the first example of the theatrical character of the EU presidency. Of course that a smaller country can't change too many things in the EU even if it is a temporary president of the union and even if its opinions coincide with the official opinions of the world's only superpower.


The Czech politicians have clearly come under fire from the self-proclaimed exclusively politically correct European politicians who effectively sleep with the terrorists in Hamas. So it took a day and Mr Potužník was forced to apologize (AFP, Google News). Now, let me ask you: do you really think that Mr Potužník or Mr Topolánek have changed their opinion about this fundamental, basic question in 24 hours?


It's ludicrous, of course. What happened has clearly been a wave of intimidation and blackmailing from Paris, London, Berlin, and other cities. (Yes, the U.K. is against the right of Israel to defend itself.) Whether or not you agree with the Israeli strikes, the stories surrounding the Czech EU presidency show that democracy and freedom of thought in Europe is limited.
Is Mr Topolánek's opinion shared by all European politicians or citizens? It's surely not. But does the whole Europe denounce Israel? The answer is obviously No, too, even though some people would love to obscure this point.
Israel and Czechoslovakia: some history
Czechoslovakia was one of the main territories whose Jewish population was almost completely exterminated during the Nazi era. A fellow (former) Fellow in the Society of Fellows once visited me in Pilsen and took me into a place where I had never been before - a museum of holocaust (plus our synagogue, the third largest one in the world). I was shocked.
Pilsen has contributed about 2,600 Jewish victims of the holocaust: virtually all of them had to die. The escalation of the anti-Jewish sentiments and policies (the disappearing Jewish right to own ski or talk to non-Jews etc.) during the 1930s was scary to follow because you can realize how easy it is for things to gradually drift in a very bad direction and how people today - or any other period of the history - have everything (bad) they need to evolve into the animals they became in the 1930s. 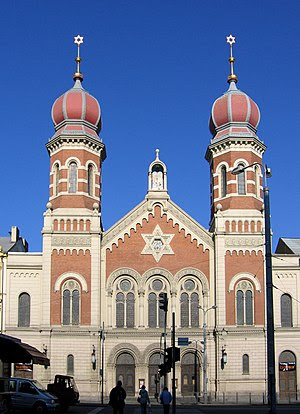 The Great Synagogue in Pilsen...

Click the picture of the French, EU, Czech foreign ministers to see a similar optimistic scenario by an Israeli professor.

I am personally convinced that the relative contribution of the Jewish nation to the modern civilization, including theoretical physics, vastly exceeds the ratio of the Israel's territory and the total land mass on Earth which is why I find it natural for Israel to be restored and stabilized within the borders of the Greater Israel we knew for a few decades.
Luboš Motl v 8:32 PM
Share