Czech PM Topolánek is chatting with you today 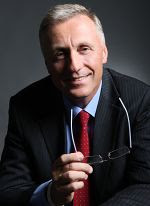 Czech prime minister Mr Mirek Topolánek, the current official figurehead of the EU presidency, will answer your questions today at 3:30 p.m. Prague time i.e. 9:30 a.m. Boston time. See Update: Around 4 p.m. Prague time, the maximum number of questions has already been asked, so Mr Topolánek just has to answer those that are already there.

Mr Topolánek is the current chairman of the right-wing Civic Democratic Party (ODS) that was founded by President Klaus in 1991 but recently divorced from him because of the recent centrist readjustments of the ODS.

Topolánek is less likely to actively fight against the global warming hysteria or the Soviet style of the EU unification than President Klaus but he still opposes various socialist policies in current Europe, including massive bailouts.

On Saturday, Topolánek's spokesman for EU presidency issues shocked and sweetened some people by explaining that Topolánek as the official EU figurehead considers Israeli operations to be defensive in character. Topolánek "saved" the spokesman, especially because there was no good reason to fire him. Topolánek is a staunch defender of the U.S. missile system, including the Czech radar, too.

Mr Topolánek's own fists are also in good shape as some paparazzi could recently witness. ;-) Related YouTube videos entertain you with Mr Topolánek's colorful language and gestures, too, but non-Czech speakers will probably not appreciate them. :-)

By the way, on Thursday, EU foreign ministers will meet in Prague to discuss the Russian cut of the gas supply now, during one of the coldest recent winters in Europe.

Meanwhile, The New York Times found out that in Fall 1997, Larry Summers was blocking the Kyoto protocol in the U.S. Let us wish the U.S., whose president's top economic adviser Summers is today, that my former überboss didn't become senile during the last 11.5 years.

You can also check the automatic translation of a rather typical article about global warming in the Czech media, Mankind's influence on the climate may be small. Skepticism thrives in Czechia, unlike other places where censorship is the king.
Luboš Motl v 9:13 AM
Share