By the way, a good news in the journalistic world. The Wall Street Journal becomes the first important newspaper that praises Czechia for A Prague Spring for Political Honesty.

The European socialists have read the refreshing if not brilliant essay by the Czech president in the Financial Times,

Do not tie the markets: free them.

Václav Klaus explains that all moments could be called "exceptional" but this adjective is usually used in order to manipulate with the people. And he argues that Europe should weaken if not repeal various environmental, social, health, and other regulations and "standards".

How did the socialists react? Well, you can guess! ;-) They went ballistic:

The article above is pretty entertaining, so let me respond to individual paragraphs:

They urged the Czech Premier Mirek Topolánek to issue an immediate statement declaring that the president speaks for himself and not the government and that his views do not reflect the priorities of the EU Czech presidency.

Very nice but before 1989, I have seen a lot of virtually identical stuff. For example, in 1977, everyone was supposed to sign Anti-Charter 77. The government should also denounce the witches, right? Why do they exactly think that Klaus' opinions do not reflect the priorities of the Czech EU presidency?


You know, unlike Klaus, Czech people don't give a damn about climate change. It is not a topic that the ordinary people or the media would like to talk about. And they are friendlier to the EU than Klaus is, especially the voters of the Civic Democratic Party (ODS) that he founded in 1991 (but that he recently left). But Klaus still enjoys approximately 70% approval rate and most people know very well why they like the person at the Prague Castle as their representative, why he is the right authority and the thinker-in-chief, and why he is likely to protect the Czech Republic and its citizens against some possible threats from abroad.

Concerning the economic crisis, the official opinion of the Czech government is actually very close to Klaus's opinion. For example, Czech finance minister Mr Miroslav Kalousek, the finance minister of the year (according to the IMF and WB; he is a Christian Democrat)

much like every responsible finance minister should do. The prime minister has similar opinions.

While the government won't officially endorse Klaus's opinions on the global warming religion (although none of the important ministers is a true believer), there are many other things in which they openly agree. For example, Czech PM Topolánek agrees (see the first answer here) with Klaus (see here) that the Russian-Ukrainian gas dispute is primarily their bilateral problem that the EU shouldn't try to control from above, a fact that another author in the Financial Times is incapable to comprehend.

(By the way, on Friday, rants by idiots have literally exploded in the Financial Times. Quack Calvin wants Klaus to read the IPCC report and blames Klaus's reasoning for the financial crisis: that's very funny because it is exactly the Czech Republic which, largely due to Klaus' sensible and cautious approach, avoided the financial crisis. An Uwe Bott also criticizes Klaus' climate heresies and recommends Europe to follow Danny the Red, the French commie. They joined Tony Barber who analyzed the shape of Klaus' head to determine that the Czech president is the good soldier Švejk: if I were Tony Barber, I would try to avoid discussions about the shape of the head, see his picture.)

As one could have predicted, Klaus didn't attend the gala evening in the National Theater that launched the Czech EU presidency yesterday. His presence could have been viewed as his endorsement of various processes that occur in the EU these days, and it was likely he would choose not to be there. On the other hand, former president Havel attended.
I watched the show on TV and it was pretty entertaining and culturally refined although I guess that foreign viewers could have failed to understand many points (e.g. that Mr Jiří Suchý is primarily a comedian and not an out-of-tune singer of anthems). Mr Topolánek's speech about the Czech eclecticism was somewhat novel, too.

The Eurosocialists also said the following:

"[Klaus] is trying to turn the clock back on 60 years of progress that has brought peace and prosperity for millions of people in Europe".

The Czech government must urgently make clear that Václav Klaus speaks only for himself and that Europe's achievements will not be threatened under the Czech presidency.

Wow: 60 years of progress that brought peace and prosperity to millions of (working) people are at stake when the reactionaries are allowed to speak. Trust me that the communists were writing identical texts in 1977 when they were celebrating the 60th anniversary of the Great October Revolution (their term for the pathetic November communist coup in Russia). It was also about the peace - the communists were those who should have been credited with bringing peace to the world - and the prosperity of the people was their achievement, too.
Whether the social changes in the last 60 years were mostly positive - or whether the progress was due to technological and other advances by the free markets that worked despite the central regulation - is an extremely subtle question and it is very clear that people inevitably have different answers to it. 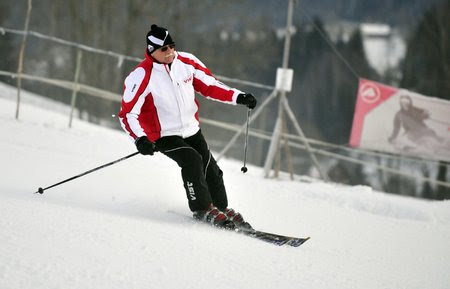 Despite "global warming", Klaus found some snow in Bohemia a week ago. ;-) It's not so shocking: we have -13 °C in Pilsen right now and snow.

The Eurosocialists also tell us that the Czech government must "urgently" denounce Václav Klaus. Oh really, do they have to denounce him? Is the Czech center-right government on the Eurosocialists' payroll? Believe me, they won't do so. In most of these issues, they simply agree with him, and even when it comes to the issues where they officially disagree with him, there won't be any doubt that they allow him to have his own opinion, much like everyone else in the Czech Republic which has been a free country for two decades (and for centuries until 1939).
If they live in countries where it is no longer effectively legal to agree with Prof Klaus, that's already too bad - but someone should explain them that the freedom of speech hasn't been nuked in the Czech Republic yet.
These politicians can be superficially respected in their countries because they are surrounded by simpletons and cowards. But believe me, if they insist that the governments should try to pretend that the opinions of a popular head of state don't even exist or must become illegal, they will be viewed as ludicrous childish puppets in much of the Czech Republic.
Unlike Santa Claus, President Klaus is a real person and his opinions are real, too. They represent the values and attitudes of at least a significant fraction of the EU citizens. And it's much more likely that Klaus will convert Barroso to his side than that he will surrender. Everyone who knows Václav Klaus will confirm my words.

Said Socialist Euro MP and president of the Committee for social Affairs and Employment, Jan Andersson: "the views expressed by Mr Klaus are against everything that European socialists stand for. Weakening social and environmental standards in Europe could never be a solution."