Lee Smolin and a co-author (who commented in a blog post "Conservative Solutions...") wrote a down-to-earth manifesto called

about the qualitative approaches to describe the survival or death of the information inside the black holes. The paper uses the adjective "conservative" 18 times. That's quite a high frequency for hippie and feminist authors who clearly have no idea what the word "conservative" means - either in politics or in science.

Why don't they omit these political adjectives that, as they must know, are not apt for their ideas? Would it be too much to ask? They seem to abandon the last traces of the rational thinking - an attitude that I don't consider to be a "conservative" virtue.

The fact that it is the horizon below which the information is guaranteed to be lost (semiclassically) simply because causality prevents it to get outside, and not the singularity (which is irrelevant for the information loss puzzle), has been repeatedly explained in detail, for example in Black hole singularities in AdS/CFT (and by Moshe Rozali and others), so that I am pretty sure that a significant fraction of the lay readers start to understand this elementary point, too. Smolin and his co-author are clearly not among them.
The authors reasonably sketch four or five possible macroscopic fates of the Schwarzschild black hole, including
Clearly, only the option (1) is an acceptable macroscopic description of the spacetime with a black hole in it, and every acceptable - or "conservative" - solution must be compatible with the general shape of spacetime sketched in (1), as we will show again momentarily. This choice doesn't quite solve all the puzzles yet but it is inevitable.


On the other hand, the Canadian authors claim that it is the crazy options (3) and (4) that are "conservative" and "preferred". Wow. Finally, let me explain why any macroscopic deviation from the diagram in (1) is not only non-conservative but simply crazy. 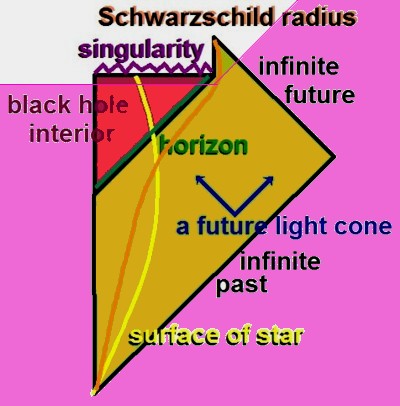 I have used almost the same Penrose diagram of an evaporating black hole many times. But here I added a new twist, the pink shading. Just to be sure, it covers most of the diagram - the lower portion to it - and it is bounded by two straight line intervals. One of them (on the left) is horizontal and one of them (on the right) is diagonal, drawn at a 45° angle. Only the very vicinity of the horizontal singularity (with teeth) and a small green triangle in the future are outside the pink area. The pink region will be explained and will become important soon.

Imagine that a star like the Sun (or slightly bigger) collapses into a black hole. Its event horizon radius will be a few miles in size. At least macroscopically, the evolution will follow some equations, including Einstein's equations of general relativity. Those classical equations are not a theory of everything but it has been experimentally established that whenever the curvature is low, e.g. smaller than an inverse inch, they have to hold with a great accuracy if you decide to ignore the microscopic details.

So why did I add the pink shading and what does it mean?

The pink region contains points P that satisfy both of the following properties:

So if you believe that Einstein's equations hold whenever the curvature is relatively small and that signals can't propagate along spacelike intervals (i.e. "faster than light"), it is simply impossible for effects that macroscopically and brutally contradict Einstein's equations to influence the points in the pink region. To change the spacetime macroscopically, they would require a high curvature or at least the existence of similar, suspicious points in the past where the curvature was high, where something new happened, and influenced the point P. But the points in the pink area don't allow either of these things.

Yes, the pink segment of the diagram also tells us that general relativity - in the regions where it has actually been verified - implies that heavy enough stars will inevitably approach the birth of a singularity at the center and there is no acceptable new physics that could stop them from doing so. Indeed, that's the case. That's what the Penrose-Hawking singularity theorems claim in detail and that's also why these theorems are so powerful.

In other words, whenever someone makes a huge modification of the metric tensor (geometry) in the pink area, he or she (or both) is throwing general relativity out of the window completely. Such a step is extremely non-conservative and nothing less than a new system of theories replacing all the known classical laws of gravity (general relativity) - including all the new, equally successful experimental tests - is needed to avoid the otherwise immediate and unavoidable contradictions.
Again, it is extremely unlikely that such an approach can ever be victorious because general relativity has been pretty much established for weak gravitational fields and the curvature in the pink region is as weak as in the situations where the theory was established. You may still try, of course. Good luck.
Moreover, if one avoids remnants that could leave eternal traces in the space where the big black hole once resided (and, for example, emit a neutron star with extraterrestrial aliens every week), he should really include the green triangle to the pink region, too. This green triangle essentially describes an empty, flat spacetime that is left after the black hole (and its radiation) is gone.
So if one decides to keep the theory exactly local and modify it only by some higher-derivative terms that can only become important when the curvature is high, he will literally influence the tiny, arguably Planckian neighborhood of the singularity and nothing else. This is clearly not enough to solve any information puzzles. The spacetime around the singularity will die in one Planck time, anyway, so whether or not its size was 0 or the Planck length when it died will have no physical (measurable) consequences - and as I have argued in Reincarnation of the infalling observer, it may even fail to be a physical question.
It may look like the information is disappearing at the singularity but once the objects crossed the horizon - i.e. entered the black hole interior - it was already decided that they have to end up in the singularity because nothing can ever escape from the black hole interior. So when they cross the horizon, the information loss problem is already there as long as the rules of causality strictly hold. If you wait for the singularity, it's just too late for a solution. Imagine that children begin to jump from the windows (horizon) at the 80th floor of a skyscraper and they get killed at the parking lot (singularity). Someone thinking like the authors of the preprint we discuss here tells the children to be careful before they encounter the parking lot and pays a firm to clean the parking lot and to make sure that the surface is not infinitely hard - because the infinity is the problem, isn't it?

She also screams at other people who want to install a security system around the windows: Why are you so obsessed with the windows? What do the windows have to do with the dead children? ;-) And you know, saving the kids during flight could be conceivable but to escape from a black hole - or to fly faster than light - is much harder.
The black hole is black because of the horizon (that prevents light from escaping), not the singularity, and some black holes, such as the BTZ black holes, don't even have a singularity. The singularities are not really necessary for a black hole.

A fully satisfactory picture of the fate of a black hole must agree with the Penrose diagram above whenever the curvature is small (especially if the curvature is small in the whole past light cone of that point) which means that the diagram above is pretty much indisputable and only very tiny effects such as "quantum tunneling" of information that leaves small imprints in the detailed correlations of the Hawking radiation are allowed to be added by a more complete quantum theory - which is what every consistent quantum theory of gravity, i.e. every description of string/M-theory does, after all.
This kills the options (3) and probably (2), although no explicit pictures of the option (2) were offered by the authors. Mysterious things like those in option (4) can possibly occur near the singularity (baby universes or remnants - and both of them look like remnants to the observers in the original Universe) except that these can't help to solve the information puzzle in any sensible way and there's a huge evidence that the particles that can live in space are classified and a wide variety of remnants is simply not (and cannot be) a part of the menu.
So the correct solution is surely described by the macroscopic diagram in (1). What was surprising to learn is that the exact quantum theory allows small violations of causality as long as their duration is finite.

These tiny, non-local imprints of the microstate into the radiation are completely enough to preserve the information while they are completely invisible in the perturbative expansion of general relativity. These qualitative answers are surely obvious to those who take AdS/CFT or Matrix theory seriously as a qualitative prototype of quantum gravity, but even those who don't have a very limited menu of options these days.
In 2009, everyone who still fails to understand that the cures to the information loss must influence regions as large as the horizon is simply far too intellectually limited to be a theoretical physicist.
And that's the memo.
Luboš Motl v 9:54 AM
Share