The National Climatic Data Center (NCDC) became the first major source of temperature data that has published its December 2008 figures. As a reader of Anthony Watts' blog nicknamed "crosspatch" revealed, you can now draw graphs that include the whole year 2008. Here is one: 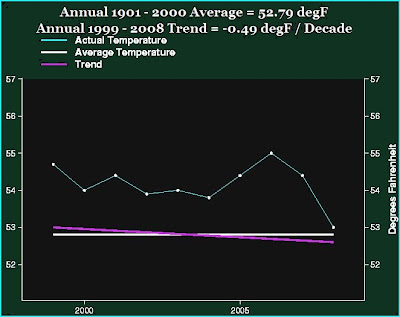 Click to zoom in. The graph shows the average U.S. temperatures in the most recent 10 years - between 1999 and 2008 - in Fahrenheit degrees. Here is how I created it:
Keep the output type for the sake of simplicity and click "Submit".
If you want my colors, take a screenshot of the right size, negate its colors, and fill the outer region by the TRF background color #113322 (17, 51, 34 decimally). ;-)


What you see if you do a linear regression is a cooling trend by 0.49 °F = 0.27 °C per decade. The cooling between 2006 and 2008 was more dramatic: from 55 °F to 53 °F, by a whopping two degrees Fahrenheit!
Crosspatch was feeling badly because he originally chose the 1998-2008 period which actually contains eleven years rather than ten: in this sense, he used a nonperturbative, M-theoretical definition of a decade. :-)
Moreover, the first year in this interval was the famously warm El Nino year, 1998. With this choice, crosspatch obtained a slightly faster cooling trend. He has paid a very high price: alarmist attack dogs immediately accused him of cherry-picking. ;-)
But even if you begin with a cooler La Nina year 1999, as I did, you obtain a cooling trend in the average U.S. temperatures during the last 10 years. Because some infrequent readers may have problems to interpret these words, let me emphasize that this cooling means that there has been no warming in the U.S. for 10 years.
I am (and the data are) not only questioning the heavenly huge, urgent, catastrophically accelerating, and global eco-socialism demanding rate of global warming but the very existence of global warming and the sanity of all people who believe this myth.
In fact, there has been a cooling, and a rather fast one that would subtract 2.7 °C per century if it continued by the same rate (and it surely won't).
Furthermore, this cooling cannot really be explained by ENSO dynamics (El Nino and La Nina episodes) because the ENSO episodes are distributed pretty much symmetrically in the last decade. This 10-year period began with a La Nina and it ended with a La Nina.
Now, indeed, other continents would lead to different conclusions. But let me mention that these conclusions wouldn't be radically different and moreover, 90% of Americans don't care about the temperatures anywhere outside the U.S.
There's been a cooling in the last 10 years which means that even if there exists an underlying warming trend, it will take many decades before this warming emerges out of the "noise" that we must assume to exist in order to avoid a direct falsification of the global warming hypothesis by the evidence above.

Soon afterwords, RSS MSU joined NCDC and gave us the first figure for the December 2008 global temperature. Anomaly-wise, which was 0.174 °C, December was 0.04 °C cooler than November. 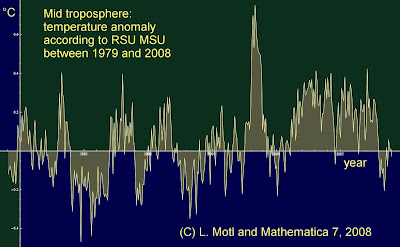 Here is the 1979-2008 graph (360 months) for the middle troposphere. There's virtually no trend here (even though the calculated trend from the regression is about +0.9 °C per century) and the 1998 El Nino is the only eye-catching feature of this otherwise chaotic graph. The mid troposphere is now cooler than e.g. in January 1980 - do you remember that you were a bit younger than today? No global warming since that time. Click the graph to zoom in.

The copyright year should say 2009 - sorry for this frequent January typo. ;-)

Incidentally, it was the first time I imported text files from the web directly into Mathematica 7 (as a table) and after a few contacts with the helpful F1 key, the procedure was unbelievably straightforward; see a simple Mathematica notebook.

By the way, during the final three months of 2008, the 12-month running mean (of the RSS mid troposphere anomaly) was at its lowest level since 1994.

If you want to see another scientific Nobel prize winner who disagrees with the AGW quasi-religious myths, see the 2002 TED talk by Kary Mullis (chemistry prize, 1993; YouTube version). There's a lot of interesting stuff in the talk, e.g. about the vacuum and the church, whether the scientific method is obvious, and his funny childhood experiments, but if you're interested in the climate, go to 20:00.

He tells you why the people in the IPCC do it for the money and travel and won't tell you the truth etc. He says that most warming seen by the surface stations has been due to the skyline effect and includes warming at night only. Via Tom Nelson.

Commercial: Czech president in the Financial Times: Do not tie the markets - free them