Pravda: Earth on the brink of an ice age

Pravda: Earth on the brink of an ice age

argues that those nice 12,000 warm years are approaching their end and the following 100,000 years will impress us with a new ice age. ;-)

Well, there is surely a potential for a 5-8 °C cooling in a few thousands years (or tens of thousands of years) - because the human civilizations that we know from the history textbooks already started in an unusually warm period (see the scary left side of the last, black graph on the image below) - but should we expect the cooling soon?

Update: David Archibald has reminded me of this picture (with an imminent icy prediction) from the 2000 article in Science by Berger and Loutre. Archibald included it in his cute book, Solar Cycle 24, as Figure 3.

Well, an imminent cooling is surely possible but the article doesn't look like the most convincing piece of science to me - both because of technical reasons, missing references, as well as entertaining, otherwise unimportant mistakes (for example, they claim that the Serbian astronomer Milutin Milanković was Czech). 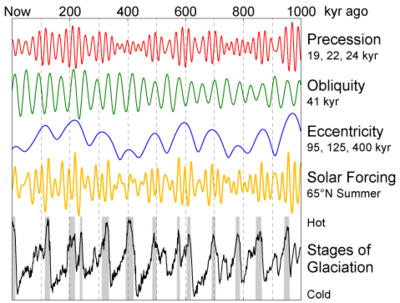 But I would like to ask you what you know and think about the reconstruction of the climate record from the Milankovitch cycles. How good a fit can we actually obtain by combining the known astronomical cycles with well-chosen coefficients?

There are indications that the purely astronomical theory fails to describe very low-frequency signals - with approximately 100,000-year or 400,000-year periodicity - whose observed amplitude seems to be much larger than the theoretically predicted one: natural climate change at very long timescales seems to be much more intense than our theories say.


But when you ignore this 100k problem and 400k problem, can you actually reconstruct some nontrivial portions of the observed temperature profile or is the Milankovitch theory mostly a "proposal" that things should work like this that hasn't been satisfactorily verified?

There are many other effects one could imagine to be relevant, including new kinds of "sonic" cycles inside the Sun and/or varying intensities of cosmic rays caused by the motion of the solar system through different galactic patches.

I am probably going to play with Mathematica and Fourier series for a while.

the mostly natural warming since the 17th century has changed the sound of wooden instruments,

a statement that sounds funny but I find it perfectly plausible, Joe D'Aleo recommends Michael Mann to include violins in the list of his favorite proxies. The rapid increase of electronic instruments in the recent years will become just another proof of the hockey-stick-shaped, catastrophic man-made global warming. ;-)
Luboš Motl v 7:00 PM
Share