Rudolf Mössbauer was born in Munich on January 31st, 1929. Congratulations!

He has been an eager teacher who thought it was important to explain anything and everything to everyone else, including your cat. Now he is a Prof Emeritus at Caltech. He has taught physics of neutrinos, neutrons, electroweak theory, and other things.

Of course, he is most famous for his 1957 discovery of the Mössbauer effect, or "Recoilless Nuclear Resonance Absorption" if you happen to be himself and you still want to look excessively modest. :-) See his 1961 lecture about it and the paper in German.

He received the 1961 physics Nobel prize for that. He was promoted to a professor in advance so that Caltech wouldn't become the place where Nobel prize winners are treated as postdocs. :-) Well, he actually shared the award with Robert Hofstadter who studied electron scattering in atomic nuclei. Right now, the most culturally important fact about Robert Hofstadter is that Leonard Hofstadter from The Big Bang Theory (CBS) was named after him. ;-)


The Mössbauer effect was new because the absorption and emission was performed by atoms bound in a solid form (iridium 191 in his case) so there was no Doppler broadening of the lines from the chaotic motion of the (formerly gas) atoms; and the atoms essentially didn't recoil at all because the recoil energy was distributed to all atoms in the lattice. These facts made the spectrum extremely sharp. Mössbauer didn't directly care about general relativity but his discovery was essential for its "modern" experimental confirmation. 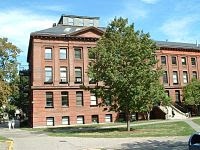 In 1959, Robert Pound and G.A. Rebka proposed their Pound-Rebka experiment based on the Mössbauer effect. In this experiment, the gravitational redshift predicted by general relativity is cancelled by a Doppler blueshift, to restore resonance, so that the velocity of the latter measures the magnitude of the former.

This experiment was carried out a few years later in the "tower" of the Jefferson Physical Laboratory at Harvard. Yes, this "tower" was enough to see the redshift because the Mössbauer effect is damn accurate. Yes, I took the Wikipedia picture of this "tower" when I occupied the second (or third?) window from the left in the left upper corner of the building: the window in the corner belongs to Cumrun Vafa. The attic is relatively new (2004), a result of an architecture brainstorm of Andrew Strominger and perhaps others.
Luboš Motl v 9:20 AM
Share