UAH MSU satellite records have released the December 2008 data. The anomaly shows 0.074 °C of cooling since November which is pretty substantial (100 °C per century haha).

Unfortunately, the newest numbers are not yet on the website I linked so we have to rely on private channels of Anthony Watts which are surely reliable because they are coming from the very center of UAH MSU. ;-)

Of course, the data show 2008 as the coldest year of the century that began 8 years ago. So far because we may see colder years in the future.

However, I just wanted to draw a few UAH graphs, anyway. So they don't contain December 2008 yet. First, here are the graphs that you rarely see: the temperature of the world's oceans and land: 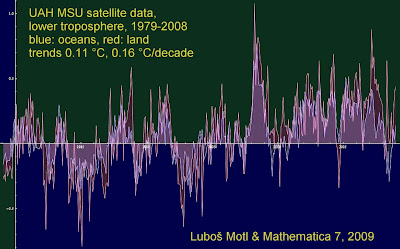 Click any graph to zoom in. You can see that the land was warming by about 50% faster rate than the ocean, 0.16 and 0.11 °C per decade, and you may hypothesize that some effects of the civilization have influenced this observation. It would probably be incorrect to talk about the "urban heat island" effects because the satellites are unlikely to be affected by the popular barbecue parties at the weather stations.

Here are the two hemispheres: 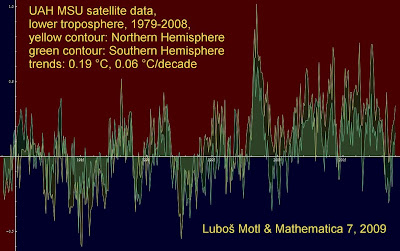 Shift/click the picture to open a bigger one in a new window. (That's an even more important keyboard shortcut than tabulator/enter that changes the color of a ball.)

You see that the Southern Hemisphere is warming up more than 3 times slower than the Northern Hemisphere which is another reason to think that the observed changes are not really global in character. If you care, the Southern polar regions are cooling by 0.08 °C per decade. I am not going to post these graphs because that would be a more serious blasphemy than the pictures of Mohammed! :-)


Moreover, the warming is in the mid troposphere is much slower while it should be faster according to the greenhouse-dominated models.
Luboš Motl v 5:18 PM
Share