Sean Carroll, Matthew Johnson, and Lisa Randall have submitted a provocative paper that tries to defend an old unpopular idea that the entropy of extremal black holes is exactly zero.

Their new argument is that the nonzero entropy calculated in hundreds of careful stringy papers, agreeing with the nonzero Hawking-Bekenstein entropy, actually refers to a different spacetime than the "pure" extremal black hole, namely a spacetime that has an extra "AdS2 x S2" patch in it. Here is the main picture: 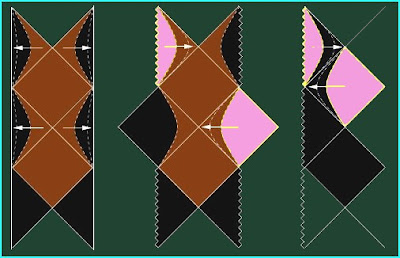 The object in the middle is the Penrose diagram of a non-extremal charged black hole. They slowly adjust the mass/charge relationship to approach the extremal limit. The extremal black hole is the object on the right. Instead of saying that the pink regions are the only ones that survive in the limit, they say that in the limit, the non-extremal black hole becomes a union of the extremal one (pink) and some additional "AdS2 x S2" space (a brown wiggly strip in the middle of the diagram), and it is the latter space (also redrawn as a straight strip on the left) that is supposed to carry the nonzero entropy.


Well, one must be very careful. The old arguments that the extremal black hole entropy should universally vanish are unphysical and their new scenario in which an additional patch of the "AdS2 x S2" emerges are a variation of the Hilbert hotel trick. So I am not buying their points. But let us look at them one by one.

In 1994, before the duality revolution, there have been some papers, e.g. by Teitelboim and by Hawking, Horowitz, Ross, that argued that the extremal black hole entropy was zero. Their conclusion was based on the Euclidean continuation of the black hole spacetime and I am convinced that the conclusion was unphysical.
In the case of non-extremal black holes, one must carefully choose the periodicity of the Euclidean time in order to avoid a conical singularity at the horizon. With this condition imposed at the horizon, the asymptotic periodicity at infinity is "beta = 1/T" and one can calculate the black hole temperature out of it.

In the extremal case, the horizon is infinitely far from the asymptotic region at infinity, so the constraint of the vanishing deficit angle evaporates, and by some arguments that the authors considered analogous to the arguments that calculated the correct entropy in the non-extremal case, they determined that the extremal black holes should have carried no entropy.

There is clearly an order-of-limit problem here and the question is which order is right.
Well, in the real world, you can't ever construct "strictly" extremal black holes. The real black holes always have at least a tiny deviation for the extremality. That's similar to the argument that you cannot ever achieve the absolute zero temperature (exactly). In fact, it's not just analogy: the black hole assertion is a special example of the principle about temperatures because extremal black holes would have a vanishing temperature.

For near-extremal black holes, there typically exist several very different methods to calculate the correct entropy. One can calculate the Hawking radiation, its temperature, and the entropy follows from thermodynamic considerations. Or one can count the microstates in string theory. Or one can study the Euclidean picture. All three methods lead to the same nonzero answer.

As far as the vanishing entropy of the extremal black holes goes, two of the three methods - microscopic counting and the thermodynamic argument based on the Hawking radiation - are absent. The first is absent because all known microscopic countings (in string theory) lead to a nice non-vanishing entropy. The second method is absent because the thermodynamic calculation of the entropy requires us to differentiate the energy with respect to temperature, which means that we must go to nonzero temperatures for a while which means that we are back to the non-extremal black holes whose temperature as well as entropy is nonzero.

So it shouldn't be that hard for you to believe me that the third method, the only one that survives, is simply wrong. It is an unphysical trick playing with some infinite and vanishing quantities in a way that is not allowed by the full correct theory. The extremal condition is understood too dogmatically in this argument and the calculation is too singular to be trusted. The correct calculation allows the mass and charge to be slightly different and only uses the simplifications that are allowed by the extremal limit: the result of the correct method is a nonzero entropy.

General rule about the order of limits in physics

This general wisdom about the "physical" order of limits applies to many other situations in physics. For example, the BFSS matrix model is said to be the large N limit of a quantum mechanical model. However, we shouldn't play with a strict "N=infinity" model from the beginning because such a model would be ill-defined and it would lead us to all kinds of wrong conclusions. Instead, we must calculate some physical quantities for a finite N and take the limit at the very end.


In the large N limit, things should simplify rather than qualitatively change compared to a finite N.
Similarly, in dimensional regularization, we first calculate quantities for "d=4-epsilon" and send "epsilon" to zero at the very end. In all these cases and many others, it is important that the intermediate calculations that we perform avoid indeterminate forms such as "infinity - infinity" as much as they can, even if we pay the price that some quantities take unphysical values.
For example, a finite N in the BFSS model means a (counter-intuitive) finite light-like compactification while a nonzero "epsilon" in dimensional regularization means a fractional dimension. But the virtue is that the quantities are well-defined differences rather than indeterminate forms: yes, that's the very purpose of regularization in quantum field theory. The limits "epsilon=0" or "N=infinity" should be taken at the very end and many things can simplify. But if we're impatient and try to simplify the model or the calculation from the very beginning, we are likely to fail. That seems to be the case of all the papers that claim that the extremal black hole entropy vanishes.

In the picture involving fuzzballs, you can check e.g. this paper by Mathur to see what's going on (top of pages 5 and 24). Samir is one of a few people in the stringy black hole industry who would refer to those old papers about a vanishing entropy.

And he explains that the Euclidean black hole argument leading to S=0 cannot be trusted because it assumes that the throat is infinitely long, even though in the real world it is guaranteed that the length of the throat can't be quite infinite. It is capped and the cap is inevitable because at the quantum level, the finiteness of the phase space volume doesn't allow the existence of microstates for an arbitrarily length of the throat; see also de Boer et al.

That's why even the "extremal" black holes have topology that effectively mimicks the near-extremal black holes, and the entropy is therefore nonzero.

Finally, let me also mention why I think that the newest story by Lisa, Sean, and Matthew defending the old paradigm is an artifact of sloppy manipulations with infinities.
It's been known since the very beginning that in the classical theory, the extremal black holes have infinitely long throats. If you visit the near-horizon geometry, you will actually see that an infinite proper distance separates you from the horizon. There's a lot of space over there. The near-horizon geometry has the form "AdS2 x S2" for the extremal Reissner-Nordström black hole and other extremal black holes have qualitatively similar near-horizon geometries.

If I simplify just a little bit, the length of this "AdS2 x S2" region near the horizon of an extremal charged black hole is "infinity" and the three authors approximate this "infinity" by something like "infinity + sqrt(infinity)": the parametric dependence in this caricature model should only be trusted at the qualitative level. Relatively speaking, that's a correction whose size goes to zero as "infinity" goes to infinity.
Now, the normal limit that would give you the extremal black hole out of the non-extremal one would use "infinity" out of the length of the throat. But because they have an extra "sqrt(infinity)", they have enough stuff in the throat to generate a "new region of spacetime", their new copy of an "AdS2 x S2" patch. There's no canonical way to see how much extra space you get because this whole game is based on indeterminate forms.

In some sense, there is something qualitatively correct about the picture of "adjusting the infinities", but the correct values of the length of the throat that one should be imagining should be finite rather than infinite in the limit. The legitimate condition to determine the right subtractions of infinities is that the black hole entropy should be continuous.

So let me summarize. I am confident that they won't change the opinion of the experts that the physical entropy of large extremal black holes is nonzero, proportional to the event horizon area, as calculated in hundreds of detailed microscopic papers. And I think that their patching exercise is an example of a risky manipulation with infinities and limits, exactly the kind of manipulations that we should be avoiding if we study all these questions in a complete microscopic framework.

Of course, the questions about the inner (Cauchy) horizon of the charged black hole (which is unstable) are mysterious, much like all questions about the infalling observer (and it gets even harder near the singularity), but I will leave this topic to another posting.
Luboš Motl v 8:24 AM
Share