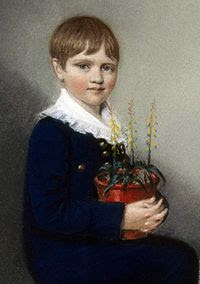 Today, Charles Darwin would celebrate his 200th birthday. Yes, he is only seven on this picture.

One of the greatest scientists of all time was born to a rich doctor and financier, Robert Darwin, and his wife, Susannah née Wedgwood, on February 12th, 1809. Mysteriously enough, Abraham Lincoln was born on the very same day, so we celebrate his 200th anniversary today, too. Happy birthday, Abraham!
As everyone knows, Darwin refined some pre-existing memes about the gradual development of life by finding the crucial mechanism, natural selection, that allows Nature to ramify its diverse tree of ever more viable life forms.
Today, his discovery sounds as an obvious theoretical idea: we view it as the only possible scenario that can reconcile the origin of life with the geological and cosmological history of the Earth and the Universe that we learned by other methods.
But Darwin had to do a lot of phenomenology to find evidence supporting his idea. So he studied the differences between birds and tortoises on the Galápagos Islands and elsewhere. He was also a practician: largely because he knew that good genes were important, he married his cousin. ;-)

At any rate, the qualitative gap between humans and animals has evaporated, to dismay of believers across the world. Humans have evolved from creatures that we would surely call "monkeys" if we saw them, even though they were not identical to the existing monkey species - our distant cousins such as chimps, gorillas, and global warming alarmists.
His discovery didn't make religion impossible but it helped to make irreligion possible. Miracles were no longer needed to explain the beauty and diversity of plants and animals and the unity of all living forms was revealed in its naked entirety. Happy birthday, Charles.
Luboš Motl v 11:53 AM
Share