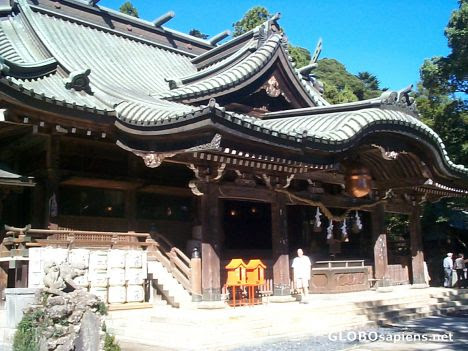 Tsukuba, the home to the 3/4 of the IKKT model.

As the author's name indicates, Sato loves the Japanese (IKKT) matrix model for type IIB string theory. My opinion whether this matrix model is correct and nontrivially incorporates all physical observables of type IIB string theory has changed many times throughout those 12 years. It's been one of the most fluctuating yet potentially "answerable" questions about M(atrix) theory.
I haven't heard any convincing, complete answers to this question and my current opinion about it is fuzzy.

This should be seen as an imported idea from the recent membrane minirevolution that has dealt with 3-algebras. While the squared triple commutator defines the bosonic part of the action, he guesses that a Psi.[X,X,Psi] term completes the fermionic terms. He realizes that it's important to check SUSY but he hasn't done so.


The U(N) 3-algebra (defined by the triple commutators) is obtained from the normal U(N) Lie Algebra by adding 1+1 extra generators, so that the signature is Lorentzian. A simple "vev" should lead to the generation of the BFSS matrix model, including other backgrounds such as matrix string theory, he argues.

I will have to check whether it makes sense because similar methods to make the BFSS matrix model "timeless" have been tried in the past and none of them looked manifestly Lorentz-covariant, if I remember well. If it works well, it could be really great, even though my hopes that a similar model could provide us with a "manifestly background-independent" formulation of all of M-theory - to use a popular adjective - is limited by a long history of similar attempts that have failed in the past.
Update
After some thinking, I am surprised that Sato didn't analyze the "d=3" case, in his formalism, which should generate the timeful BFSS matrix model for type IIB string theory. In the decompactification limit, he should see the superconformal 2+1-dimensional field theory - which should be the same theory as he has, one based on triple commutators, but with 2+1 spatial dimensions.
Incidentally, this BLG superconformal theory in 2+1 dimensions can be simply dimensionally reduced to 0+0 dimensions to get a supersymmetric model, so there's no doubt that it can be made supersymmetric.
The "d=3" (BFSS for type IIB) and "d=0" (IKKT for type IIB) should be related by an equivalence that should become manifest in Sato's model if it works. He seems to be extremely sloppy about the periodicity of various variables and most other details that are necessary to check the physics of individual vacua.
The price of Lorentzian 3-algebras
In the fast comments, JB has a very relevant comment with two appropriate references, claiming that the Lorentzian 3-algebras don't really bring us any new nontrivial physics (unlike the algebras in ABJM models) - they're either equivalent to free, or old super Yang-Mills theories. Well, the papers seem OK but they have only been done in 2+1 dimensions.
In 0+0 dimensions, the work hasn't been done and the answer may be different. Also, there might be more subtle operations to be done with the Sato model than just Higgsing, and those could generate more interesting models. Also, I need to stress that in M(atrix) theory, we don't really want to generate "entirely new theories".
In the light-cone gauge, the vacua are described by ordinary Yang-Mills theories and it is questionable whether we want something entirely new, besides a more compact "unifying umbrella" above all these theories. If you could derive all the old theories from such a new umbrella, it's likely that you could also treat the umbrella differently a derive new theories (ways to describe additional vacua previously unaccessible to matrix modeling).
Luboš Motl v 8:20 PM
Share