Ernst Mach was born on February 18th, 1838, in Greater Brno, Moravia, Czech Lands, Austria-Hungary. He was my territorial countrymate, if you wish, but no Czech would ever consider Ernst Mach to be a Czech guy.
His father was a tutor. Ernst studied and worked in Prague, Vienna, and various other places in the monarchy.
He became well-known for some rather rudimentary research of acoustics: the Mach number is the speed of an object divided by the speed of sound (that's not too hard). He investigated shock waves and similar effects related to the Mach number (together with his son who has made much more specific contributions with his interferometers and similar gadgets).
Ernst Mach also knew something about physiology/medicine and spent quite some time with psycho-physics - various questions what we're able to see or hear or smell and how the brain roughly deals with the information. Mach bands are a good example of an optical illusion he discovered: 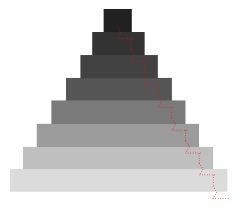 The image above only includes a smooth gradient in the middle but your eyes probably think that there are two discrete strips in the middle of the picture.

Mach and philosophy of science
Clearly, the contributions above were not terribly deep and Mach is primarily remembered as a philosopher of science. His philosophy of science was bizarre, to say the least. First of all, he promoted his own idiosyncratic version of phenomenalism. According to this philosophy, only sensations, and not physical objects, are real.


On one hand, this philosophy is a form of subjective idealism that denies the physical reality. You might think that it is therefore very close to solipsism and religion. On the other hand, phenomenalism may be interpreted as an extreme form of empiricism, the school that says that knowledge always stems from our experience and that is very popular among the materialists.
This mixture of opposite themes appears everywhere in Mach's philosophy - and in philosophy in general.
In some sense, philosophers often struggle to be "extreme" in their reasoning. In other words, they want to create very uniform metaphysical theories to understand the whole world. This attitude may look similar to theoretical physicists who also attempt to create simple theories and explain "much by little" except that the philosophical theories typically don't work because they're usually so extreme that their authors never ask whether they agree with the world in detail. Philosophers only need a pen and a sheet of paper while physicists sometimes need the garbage bin, too.
Their extreme viewpoint often prevents the philosophers from realizing some basic things that are obviously true and from getting rid of some assumptions that are demonstrably false. For example, Ernst Mach disliked atoms (and Ludwig Boltzmann personally). Much like the contemporary irrational critics of string theory, Mach argued that atoms were too small to be observed directly. That's why the atomic hypothesis was unwarranted and "insufficiently economical" for Mach.
Well, Mach was clearly wrong. Atoms do exist and they're damn important. Mach's bizarre anti-atomic attitude may be blamed on his obsession with the sensations. It is very difficult to (directly) "feel" or "see" or "hear" the atoms so they have no room in a description of the world that relies on sensations only. Except that Mach never asked whether his assumption that the world had to be reducible to sensations was a natural starting point to make correct expectations about phenomena. It was not.
It's bad if someone treats incorrect assertions as dogmas. Moreover, indirect sensations (using experimental devices and microscopes) are as legitimate as the direct ones.
His phenomenalism made it difficult for him to understand and accept many other key theories in modern physics, including special relativity:

“The theory of relativity is just as unacceptable to me as, say, the existence of the atom or other such dogmas.”

Why was relativity so tough for him? Well, he believed that everything boiled down to sensations. And all physical theories were just some bookkeeping devices to organize a couple of sensations, he thought. All such constructions based on psychology should be short-lived, just like our mood swings. So he believed that all physical theories should be short-lived, too.
Einstein's second postulate - the constancy of the light speed - looked too "long-lived" and "rigid" to Mach. He hated rigid statements, so he dismissed special relativity.
Clearly, he was wrong about this issue, too. Whether physical theories and principles are rigid or short-lived can't be answered a priori. And when we actually collect the evidence, it turns out that many key physical theories and principles are extraordinarily rigid. It's a feature that is easily understood in the picture of the world as an objective entity. But in the picture where everything is made out of sensations and mood swings, it is hard to understand why the physical principles should ever be so robust. But they happen to be robust. And you might expect that I actually like the "rigid" character of the fundamental laws of physics.
Needless to say, lots of people shared and still share Mach's preconceptions and misconceptions, a fact that prevents them from understanding the bulk of modern science. Ernst Mach was very influential among intellectuals. For example, Vladimir Lenin's famous text "Materialism and empirio-criticism" was directed against the Russian Machists.
You know, Lenin wrote a lot of silly things, including childish statements about science ("the electron is inexhaustible and has infinitely many internal degrees of freedom, like a galaxy") and I have political reasons to dislike him but he was probably closer to the truth than Mach and his followers. After all, you shouldn't think that the Russian Machists were anticommunists. The most important one, Alexander Bogdanov, was a top bolshevik, too.
Mach's principle
The fact that Mach rejected relativity makes us wonder why Einstein was so enthusiastic about Mach's principle as a possible pillar of general relativity when it was under construction. Well, chronology is a part of the answer and Einstein's scientific integrity is another part of the answer.
What does Mach's principle say? There is no clear and universally acceptable definition. But roughly speaking, it says that inertia is a consequence of the presence of other objects in the Universe. If there were no other objects, such as stars, in the Cosmos, you wouldn't feel any inertia.
This is a pretty vague statement but I remember that some decades ago, I also had a "sensationalist" approach to all these issues. I directly wanted to "feel" how the other objects have to influence our local behavior, including inertia. However, when you try to write down some equations, which is something that you certainly should, and Mach has never tried too hard, you will be able to see that the idea makes no sense.
For example, the coefficient that would determine the inertia as a function of the external mass in the Universe can be reabsorbed to the choice of units. Moreover, anisotropic distributions of masses could make the moments of inertia of a ball around different axes differ. Later, you will face a lot of questions whether the more distant objects have a greater or smaller influence. Finally, you will ask whether the principle is compatible with Newton's equations, and if it is not, how can you modify them without making your theory instantly falsified.
If you assume both the equivalence principle and Mach's principle, you may conclude that all gravitational fields must (much like inertia) be caused by other objects in the Universe. This statement is manifestly false in general relativity because e.g. gravitational waves may exist without any other material sources. It follows that most interpretations of Mach's principle are incompatible with general relativity.
Nevertheless, Mach's principle had a profound psychological impact on Einstein when he was discovering the laws of general relativity. Some relativistic effects, such as frame dragging, may sound "natural" from a Machian perspective. But other consequences of the Machian mindset seem to be in direct contradiction with general relativity.
For example, Stephen Hawking presents Mach's principle as the statement that

Local physical laws are determined by the large-scale structure of the universe.

Again, it's not clear what is really meant but verbally speaking, the statement above seems to directly contradict the well-established principle of relativity and the equivalence principle. According to these pillars of relativity, one can't determine his state of motion (or the existence of other objects and fields) in a small enough, freely falling lab, regardless of its velocity. In other words, the local laws of physics (and perceptions!) are completely universal for all velocities (special relativity) and all gravitational fields (general relativity) and the large-scale structure of the Universe is not allowed to play any role.
By the way, between 1908 and 1913, Ernst Mach also debated Max Planck. The topic was the purpose of science. Mach thought that science should primarily serve the society while Planck insisted that science primarily has to satisfy its own goal to understand the world. Planck won.
To summarize, Ernst Mach was a deeply confused man and his criticisms were almost exclusively destructive. But he was sufficiently confused so that his thoughts could help men like Einstein and Lenin to crystallize their own ideas which were much more specific - fortunately in the former case and unfortunately in the latter case. ;-)
And that's the memo.
Luboš Motl v 7:27 PM
Share