In September 2008, a huge gamma ray burst (GRB), GRB 080916C just below the star Chi Carinae, could have been seen in the southern sky from the Earth. Fortunately, Fermi (formerly known as GLAST, TRF search) was actually there to see it. And three days ago, the paper announcing the good news was released:

The gamma rays were arriving during a 16-second interval. Various frequencies tend to come earlier or later.

The explosion is a complicated event and it is clear that different photons are born at different places and different moments, which may explain the lag. However, it is also conceivable that the speed of light is different for different frequencies.
Can we decide what is the real origin? Yes, we can. If the reason is a frequency-dependent speed of light, the lags will be longer for GRBs that are further from us. 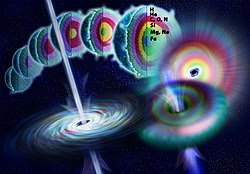 The new huge GRB shows that the contribution to the lag from a variable speed of light must be very small - because the spectrum of the burst precisely follows a universal spectral curve expected from the internal dynamics.
In this way, the measurement sets the best bounds on Lorentz violation we have so far. In the parametrization popular among the Lorentz-violating self-described "quantum gravity theorists", the typical scale where the Lorentz violation starts to be big must be above 1/10 of the Planck mass. Everything below this gigantic mass scale has been proven to respect the Lorentz symmetry, if you wish.
As you can see, we're almost there.
Fermi should be able to see a sufficient collection of GRBs at various distances to improve the accuracy and allow us to separate the "complexity of a GRB" and "Lorentz-violating" contributions to the lag. It is extremely likely that in a few years, it will be able to rule out all existing theories of quantum gravity except for string theory because all of them predict some kind of Lorentz violation that becomes large near the Planck scale.


In other words, there will finally exist an ultimate experimental proof that the people who have been promoting a complete denial of special relativity - in the form of various loop quantum gravities, doubly or deformed special relativities, dynamical triangulations, and all this stuff have been idiots, just like I have always emphasized.
But that will be the memo in a foreseeable future.
Bonus: Why Fermi can get up to the Planck scale
The accuracy of Fermi and its ability to probe effects generated at the Planck scale may sound surprising because we are used to say that Planck scale physics is inaccessible to doable experiments. But it's not hard to see why the question can be answered in the case of Lorentz-violating effects. It's because they're very brutal and they don't average out when the gamma rays travel across the Universe.
Any Lorentz violation will lead to minute differences in the speed of light for different "colors", using the words of Leslie Winkle. ;-) What are the differences in the speed? Well, by dimensional analysis, they must scale like

Why? Because (v/c) is dimensionless, the speed differences must be proportional to energy differences (if Delta(E) is small) or frequency differences, if you wish, and the denominator of mass "M" (to the first) had to be added for dimensional reasons. If you wanted to put "E" in the denominator, you would get a huge "Delta (v/c)" of order one which would be totally excluded.
On the other hand, it is hard to construct a theory that would put powers of "E" in the numerator (compensated by higher powers of "M" in the denominator), and that would set the terms with no "E" in the numerator equal to zero, and as far as I know, no existing theory does so.
In effective field theory, you can see that the term above should be there: write "E" of a photon (a "Hamiltonian") as "|p|c" (the relativistic part) plus corrections. Clearly, the corrections will exist if Lorentz invariance is violated, and corrections of the form "|p|^2/M" will be the first subleading ones: we are Taylor-expanding a function. They will give us exactly the variation of the light speed that was announced above.

That may look like a small number. However, such a relative change of speed will change the time for the gamma rays to get to the Earth by 10^{-17} of its value. Because the GRBs are many billions of light years away from us (this GRB occurred about 12 billion years ago), i.e. approximately multiples of 10^{17} light seconds, it is easy to see that even a Planck-suppressed energy-dependent violation of the universality of the light speed must manifest itself as multi-second lags for different frequencies, and is observable by the Fermi probe.
Once Fermi has seen many GRBs at different distances and the prescription for the lag at different frequencies will looks sufficiently universal for GRBs of the same kind (but at different distances), the frequency-dependence of the light speed will be ruled out.
Luboš Motl v 9:07 AM
Share