A fun story of a zeta-function identity

Off-topic: Click the Chrome logo to download the newest Google Chrome 2.0.167.0.
The previous article about the topic was:

When I was a sophomore in Prague, in 1993 or 1994, Dr Ctirad Klimčík (Luminy, France, a specialist in integrability) gave a nice colloquium about string theory. At that time, I had already studied a lot of stringy NPB papers and preprints on the arXiv but his talk was new and inspiring, anyway.

One of the technicalities he emphasized was the zeta-function regularization. More concretely, the sum of positive integers equals -1/12, he said. He convinced me completely so I wrote an article into our student journal, Pictures of Yellow Roses, with a new proof of the identity based on Taylor expansions with respect to a new parameter of a generalized zeta function, a shift.

One year later or so, in October 1995, I submitted a preprint about these issues: a dedication to my Christian ex-GF was included, much like a brand new system to label preprints, starting from HEP-UK-0001 (I've never abandoned it; UK stands for Charles University in Czech). It generalized the "sum of integers equals -1/12" in various ways and used it to calculate commutators of Virasoro operators in string theory - and even in free fermionic models. ;-) You may see that my English got a little bit more authentic since 1995.


When I look at the paper from the current 2009 viewpoint, it was silly in several respects. Had I written the operators in a normal-ordered form, the divergent parts of the commutators could have been reduced to the standard, simpler sums. At least I think so right now. It seems that Polchinski's and other textbooks have almost completely avoided the divergent parts of similar sums, when calculating i.e. "Q^2=0" for the BRST operator.
(Well, they may have avoided them simply because they calculate the things in the continuous language of OPEs, I must have a look.)
On the other hand, such a strategy would have been against the philosophy of calculations that I preferred at that time: all these operators should always be written in the "most naive form", instead of the normal-ordered form, and all the normal-ordering constants should be correctly calculated using the zeta-function and similar regularizations.

The paper has only had one self-citations for more than a decade - no, this wasn't yet one of the well-known papers. ;-) The situation changed three months ago when

wrote a highly sophisticated paper about the Bethe equations for a type IIA string in the plane wave limit of AdS4 x CP3. It is an impressive set of calculations ending with a perfect agreement so I have no very good reason to doubt that the calculation is correct, much like those in similar papers by more famous experts on integrability.

There is just one step that some people might consider a black magic. When Sundin calculates a normal-disordered part of a quartic expression, not unsimilar to what I calculated in 1995, he has to refer to my paper in order to throw most of these terms away, by claiming that

for a positive exponent "s" and an arbitrary shift "a". I've noticed that many people find such assertions controversial but I am convinced that they are completely wrong and lack the intuition that will become standard methodological material for graduate students by 2050 much like the Feynman diagrams and parameterizations have become standard by now.

The identity above is valid in the sense of theoretical physics, can be proved by various Taylor expansions (where you need to ignore the divergent character of the sum, which is the right thing to do), and it is arguably useful for calculations in integrable systems.
For example, if "s" is even positive and "a=0", the identity tells us that the sum of even powers of positive integers vanishes. For "s=0" and "a=0", it tells us that the sum of "1" from "1" to "infinity" equals "-1/2" because it cancels with the symmetric sum and with "1" from "m=0". But the formula tells us much more than that.

The fact that Sundin had to refer to a sophomore paper to support this correct yet simple identity in his correct paper shows that these manipulations with divergent expressions are wildly understudied.
Hundreds of people in the world are paid for studying loop quantum gravities, spinfoams, deformed special relativities, Bohmian models, and dozens of similar topics that are known to be pure crap. But virtually no one in the world is trying to "organize" the world of infinities that appear in these simple yet fundamental divergent sums.

That's a shame.
As we explained in Infinities, divergences, and emotions, the main reason why so many people underestimate the validity and importance of regularized identities like one above is that they misunderstand what's "scary" about infinities and what is not. In physics, the real problem is not that something "looks" like an infinite sum or an infinite integral. Instead, the only related problem in physics is that an expression doesn't have a unique, well-defined value. That's what kills the predictivity of physics.
On the other hand, there are many sums and integrals that look divergent but are actually completely well-defined, unique, and finite, whenever they occur in physics. And on the other hand, there exist all kinds of "regularizations" where previously infinite expressions become finite (by adding a cutoff) but these regularizations don't change anything whatsoever about the loss of predictivity.
This is a very difficult issue to explain to the non-experts. But sometimes, it helps to repeat things. So in physics, our goal is to predict things, and if a calculation is spoiled by some ambiguities - or even an infinite number of arbitrary parameters that can't be determined - it's bad, whether or not the equations look finite. On the other hand, when objects can be shown to have unique values, there's no problem even if the intermediate calculations look divergent.
I am convinced that in the future, physicists will gain much more experience and intuition about the finite values of sums and integrals that are currently dismissed as divergent and the methodology behind this intuition may even become an important part of their courses on calculus. These methods and wisdoms are not quite "new physics" but they're damn important "new mathematics" in physics.
And that's the memo.

Marco Frasca has written a nice brief comment about these issues, also bringing my attention to Divergent Series, a book by Hardy. The first new identity I literally love is due to Euler, on pages 26-27 of Hardy's book. Using a new notation "g=-x", it says

This seems highly relevant for summing divergent, "asymptotic" perturbative expansions in the coupling constant in terms of some modified instantons: the answer in this particular simple case seems to be more unique than you could have expected.

I've played with visualization of E8 roots in Mathematica. You can see an animated GIF file, root.gif, by clicking this related still image: 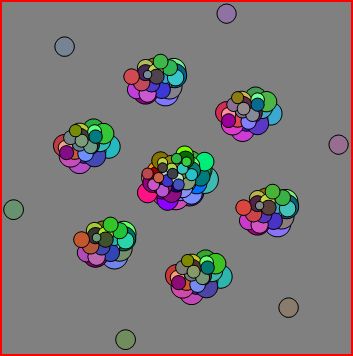 It shows how the E8 roots are shifting if you're going from the Cartan subalgebra of a natural SU(2) x SU(2) subgroup to a Cartan subalgebra of an SU(3) subgroup. Some chaos is added deliberately. The same picture shown above also captures the G2 x F4 decomposition because SU(3) is a subgroup of G2 and only the 3+3bar weights of SU(3) are interpreted as new roots in G2.

I was impressed that one can write a simple, 4-line code that creates an array with all the 240+1 (the last being zero) distinct E8 roots! Just write 5 templates and add minus themselves and all of their permutations. On the other hand, I was highly underwhelmed by the apparent inability of Mathematica to compute things like the logarithms of matrices which I needed.

In the visualization, two of the eight root coordinates determine the position on the screen. The third coordinate decides about the size of the disk. Moreover, following Mr Ivan Mládek's artistic style of antiperspective, the closest (highest-priority) disks are drawn as the smallest ones (what is close looks small here!), in order to increase the number of visible objects. ;-) Three more coordinates are seen as the RGB colors of the disk so I directly visualize a six-dimensional space. ;-)
Luboš Motl v 8:15 AM
Share