Gavin Schmidt is his own mystery woman 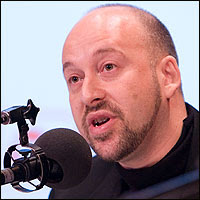 Gavin Schmidt, a blogger with RealClimate.ORG and an ideologue paid by NASA, has written quite a few crazy things to defend the indefensible.
For example, when a paper claimed that phytoplankton destroys a lot of ozone, Gavin Schmidt argued that it didn't matter. He proudly revealed that his favorite climate models neglected all of ozone (a top-five greenhouse gas) and probably most of the dynamics of the oceans (with their huge heat capacity).

I said simply Wow. Get back to the graduate school, Gavin.

This story occurred more than half a year ago and the times are different these days. Over at Roger Pielke Sr's blog, Henk Tennekes, an expert in these matters, analyzes Schmidt's stunning ignorance about the effects that are important for the weather and for the climate (yes, oceans are important for the climate: a few-meter-thick layer of the world ocean beats the heat capacity of the whole atmosphere) and recommends Mr Schmidt to return to the graduate school.

Antarctica and a mystery woman

But there's another story that is more sociologically revealing. On Sunday afternoon U.S. time, Steve McIntyre of ClimateAudit.ORG identified a likely reason behind a small part of the warming that was recently claimed to have occurred in West Antarctica. A weather station, Harry AWS, was relocated and its temperature readings showed some discontinuity.

Bill Gray's paper: On the hijacking of the American Meteorological Society (Word), via Tom Nelson

On RealClimate.ORG, there has been an article about the Antarctic temperatures, Warm reception to Antarctic warming story, published on January 27th. As you can imagine, when Steve wrote about his findings, his readers instantly contributed comments about Steve's findings to the RealClimate.ORG discussion thread, too.


The first one that was posted was from Bernie (#148) on Monday afternoon. Schmidt answered:

No-one should be against better data. It would have been nice had SM actually notified the holders of the data that there was a problem (he didn’t, preferring to play games instead). If he hadn’t left it for others to work out, he might even have got some credit ;).

Schmidt indicates that by his complete analysis and important findings, McIntyre was "playing games" while he left the "work to others". Those "others" deserve the "credit". Who are the others? What can be hiding in the smiling icon? On Monday at 5:15 pm, Steve Reynolds (#154) asks Schmidt whether it was not rather petty (as well as possibly unethical) to refuse credit because you don't like the source or their methods of communication. Gavin wrote:

People will generally credit the person who tells them something. BAS were notified by people Sunday night who independently found the Gill/Harry mismatch. SM could have notified them but he didn’t. My ethical position is that it is far better to fix errors that are found than play around thinking about cute names for follow-on blog posts. That might just be me though.

Wow, so "people" will generally credit the person who tells them something, not the actual discoverer, even when it is completely clear who he is. A very "ethical" position, indeed. It just happened that some other "people" found the discrepancy independently, on Sunday night, right after thousands of people read about it on McIntyre's website. According to Schmidt, these "people" deserve the credit.

Who is the mysterious woman who independently discovers the same thing as Steve McIntyre a few hours after him? It may have been Ms Evets Erytnicm, a bright woman who loves Al Gore & RealClimate.ORG and dismisses the skeptics. She has nothing to do with McIntyre, except for a detail that you may discover yourself. ;-)

The truth is more prosaic. Steve McIntyre asked about the identity of the "mystery woman". It was Gavin Schmidt, the British Antarctic Survey answered. Wow.

So this guy has stolen McIntyre's discovery, sent it to the British Antarctic Survey with the explicitly stated intent to get "credit" for it, and he has lied about it to tens of thousands of readers of their blog. And he is not a random reader of the blogs: his funding - millions of dollars in total - actually depend on this type of "credit". You know, this is just way too much. Imagine the harsh and deserved criticism (and comparisons with the arrogance of power in the communist regime) that used to appear here.