Five days ago, Anthony Watts noticed a stunning decrease of the Arctic sea ice area in one of the sources that monitor this quantity.

The weekly decrease of the anomaly was about 5 times faster than the typical weekly change of the same anomaly in the past. So the unusual development was a five-sigma effect, something that shouldn't occur by chance.

Unless you believe in miracles, tipping points, extraterrestrial aliens, or catastrophic global warming, it should have been clear to you that the graph was a result of a failure or a mistake. Indeed, two days later, NSIDC confirmed that it was the case.

But Cryosphere Today is delayed. So only yesterday, we had the the opportunity to see the actual picture, as Anthony Watts pointed out. Cryosphere Today actually offers the whole maps which are much more interesting than a graph. Here it is, clear as sky: 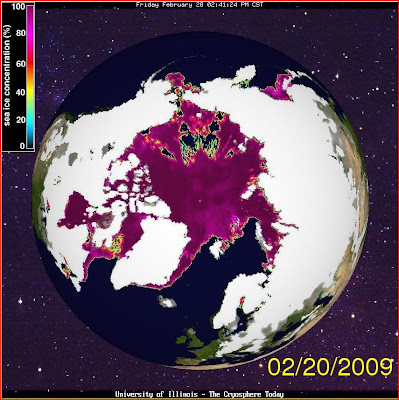 Within 24 hours, four huge (black) holes developed near the North Pole. Half a million squared kilometers of ice were lost. The missing ice is nicely symmetric and carries the fingerprint of the human murderous acts against Ms Gaia.

If you look closer into the (black) holes, you will find a rather big text over there. It says "coal power plants are death trains in Auschwitz" - just like the popular prophet likes to say and pray. The debate is over: the industry is guilty! ;-)

More seriously, you can actually see the shape of the SSM/I sensor of the DMSP satellite. It looks (or looked) like it may have 12 arms or so and something was damaged near 2 arms. Sadly, ClimateAudit.ORG also seems to be down, for reasons that could be related to hardware.
Luboš Motl v 9:52 PM
Share