Special relativity makes things "being" Lorentz-contracted, processes "are" affected by dilatation, relativity of simultaneity, and there are other effects: see the visualization in Relativistic phobia. But what you "see" at relativistic speeds is a different question because the delay of the light signals has to be incorporated.

Via Antony Searle (see to view a couple of relativistic pictures). With QuickTime, you may also watch

Relativistic rollercoasters and other things are included: wait until the movie is downloaded. Even more impressively, you may download a pretty new Win/Mac program,

Updating your DirectX 9 might be necessary if you're getting a dx* error message. Vista users: don't be afraid, the update won't damage your DirectX 10.

Beautiful car races (in full screen resolution) with relativistic effects are ready for you. 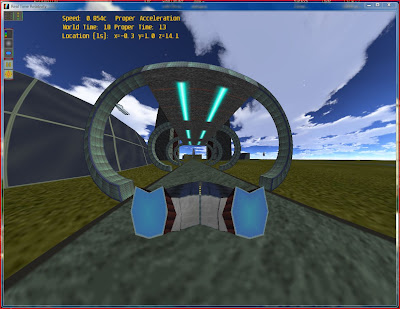 A relativistic car race is getting started. Click to zoom in.

When you start to accelerate, objects in front of you initially seem to drift away from you. They become more spherical, too: a flat plane in front of you looks pretty much like a sphere: it's not a coincidence that these visual effects remind you of the Möbius transformation movie: locally, SO(3,1)=SL(2,C), after all.

That's no coincidence at all. Roger Penrose could explain you how these transformations affect the light rays - twistors are great, too. ;-)


The action of the Lorentz transformations on the S^2 of the light-rays in a given point is actually the angle-preserving Möbius transformation. The stereographic coordinates (x,y) are simply rescaled by "Sqrt((1+v)/(1-v))" if you boost the system by the speed "v". See a simple notebook. 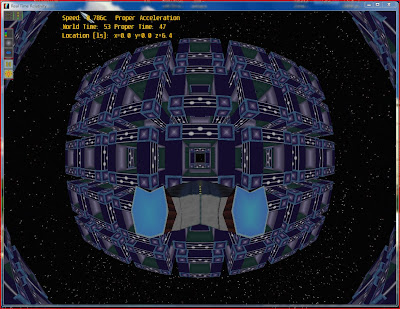 This would be a cube lattice in a non-relativistic world. The cubes further from the center look further from you because you're observing them at a more distant past (you move forward and it takes more time for the light to get to you from there). Click to zoom in.

For 10 MB, it's heckuva game. Settings allow you to change the keys/mouse to control the vehicle, change the resolution, turn on/off various effects (e.g. Doppler shift) etc. The Lorentz transformations are actually computed by the graphics card; see the preprint about the program.

I think that many PC games on the market should include relativistic effects. Children would finally know what they see e.g. when they approach a black hole and they would be less likely to become crackpots as grownups. ;-)
Luboš Motl v 9:19 AM
Share