Will the euro survive?

R.I.P., the Stability and Growth Pact

The eurozone shares a currency even though it doesn't quite share a federal government, or at least not a fully authoritative, functional, and dynamically elected one.

The currency should be protected by the Stability and Growth Pact, adopted in 1997. It forbids the member countries from exceeding 3%-of-GDP budget deficits and 60%-of-GDP national debts.

As President Klaus said last year (and earlier), the euro didn't have to pass any tests during the first decade of its existence. Many people were laughing but the situation may be changing. The "crisis" allowed many people to transform The Stability and Growth Pact into a worthless piece of paper in October 2008. 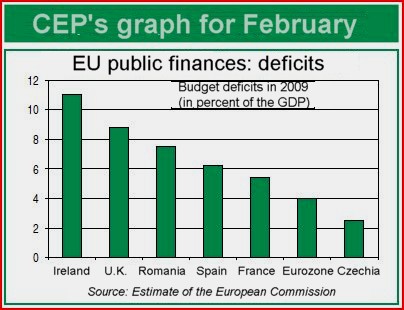 Ireland, Greece, Spain, France, Malta, and Latvia (with a currency peg) will have heavily broken the Pact next year. Ireland is expected to have 9% budget deficits at least for two years and its debt will jump from 24% above 60%.

In the past, Germany used to promote separate national fiscal policies. However, German finance minister Peer Steinbrück was the first one to suggest a "bailout" for Ireland, in order to save the country from "severe challenges" (Trichet's words) and a possible bankruptcy.
Richard Howard of Hayman predicts that Germany will prefer to save the money and it will leave the eurozone.

Soft landing, like this professional example on the Hudson river, would be better for Ireland.

The expected expansion of the eurozone's debt may be transformed into a full-fledged Italian style of living from the debts. Some countries may find the lack of the discipline of others irritating while others will feel constrained by the common rules and interest rates.
It is surely not unthinkable that the eurozone will start to decay in a couple of years. What do you think?

Meanwhile, the Czech carmaker Škoda (in the Volkswagen Group) is going to resume the 5-day week since March in most buildings. In January 2009, the Škoda Superb sales were 7% above expectations. Some other Czech carmakers, like Czech Hyundai in Nošovice, are even planning to work on Saturday. ;-)

The increasing demand (for competitively priced cars) is supported by Western European subsidies to the buyers of new cars.

In 2007, the deficit was just 163 billion dollars, almost 11 times less, but Bush was constantly criticized by the liberals. The situation is different for comrade Obama, isn't it? He is allowed to create arbitrary deficits. The idea is that huge deficits can lower e.g. the weekly jobless claims - today at 667,000 - and revert the dropping GDP - it dropped by 6.2% annual rate in Q4 of 2008.

Except that deficits can't do such a thing.
Obama's socialist government has many other plans e.g. to rob the (relatively) rich. That shows his complete misunderstanding of the present situation. The problem is that the (relatively) rich - those who create (useful) job opportunities etc. - got much poorer (because of sinking equities etc.): the poorer people were not affected. The right social-engineering way to kickstart the economy would be just the opposite thing: try to pay money to the rich - those who own companies and stocks and who lost dearly.
Luboš Motl v 4:59 PM
Share