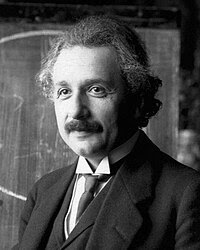 As Jonathan has pointed out, Albert Einstein was born on the "Pi Day" i.e. March 14th, 1879, in Ulm, Baden-Württemberg.

(The town lies exactly on the Danube that defines the boundary with Bavaria. Ulm including its former part and current twin city, New Ulm, on the other side of the river belonged to Bavaria until 1810. Now only New Ulm is Bavarian.)

Albert Einstein is clearly too large a figure to be fully squeezed into one posting. Moreover, most of us know quite a lot about him. We have read many books about Einstein, too.


For example, 307 postings on this blog have been partly dedicated to "relativity" (via Google; and dozens of them completely). And the word "Einstein" (via Google) occurs in 209 postings. So I will not attempt to write any "exhaustive" biography here.

His parents were Hermann Einstein - a salesman and engineer - and Pauline née Koch. They soon moved to Munich where Albert's father and his uncle founded an electric company which went bust when Albert was 15. I will not talk about Albert's early speech difficulties and other signs of a weak autism, his violin, or his early love for geometry and calculus because these things are generally known. 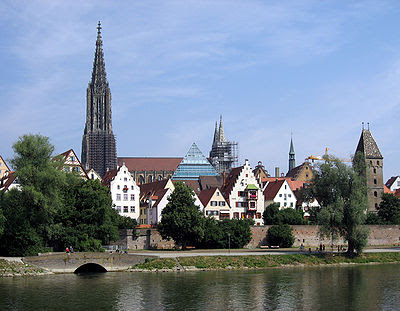 When Einstein was 15, he also wrote his first paper about the "state of aether in magnetic fields". At that time, he decided not to finish the high school (where Hermann Minkowski called him a lazy dog). Instead, he went directly to Zurich's Polytechnic School. However, he failed an entrance examination so he had to finish his high school in Aarau, Switzerland.

When Einstein was 16, he began to think about the thought experiment in which he was chasing light. With his powerfully creative mind and patience, it was already inevitable that he would complete special relativity a decade later.
While it sounds politically incorrect to many ears, contemporary experiments played no role for Einstein's discovery of special relativity whatsoever. And the only hint we have that Einstein actually knew about the Morley-Michelson experiments was that he cited a paper by Lorentz that mentioned these experiments.

I will omit various women that Einstein loved or married and gossips about his possible ungentlemanly behavior because I don't find these things important relatively to other aspects of Einstein's life.

In 1903, Einstein's job in the patent office was declared permanent. As everyone knows, 1905 was his miraculous year. All the big discoveries actually appeared within two months or so. Relativity revolutionized our understanding of space and time. The photoelectric effect theory earned him a Nobel prize and meant a big leap towards the birth of quantum theory. His theory of the Brownian motion has eliminated all sensible critics of the atomic hypothesis.

He spent the following decade by trying to incorporate gravity, an effort that became victorious in 1915-1916 when general relativity was born. Although 10 years looks like a pretty long time to invent "int R sqrt(-g)" (but only those who have been looking in the darkness know the feeling when they see the light!), Einstein actually got pretty good in the maths, at the end. So he could also calculate the first new effects in GR, the precession of Mercury's perihelion (a weak heart attack when it agreed) and frame-dragging. His perturbative approach to these questions was very "modern", I would say, even though exact solutions were later found, too.

Needless to say, Einstein's research of general relativity was as purely theoretical as his previous research of special relativity. He tried the same strategy of "pure thought" once more, when he attempted to find the unified field theory, but his conservative physics principles and separation from the detailed work and experiments (mostly linked to quantum mechanics) turned out to be too high obstacles in front of his third attempts. The attempt remained fruitless but Einstein became the clear pioneer of the search for the unified theories after him - especially for the string theorists.

Besides all the basic theories that have been mentioned, Einstein is also responsible e.g. for
Einstein was wrong about many things - not only quantum mechanics - and he failed to discover many things that he could have predicted, e.g. black holes (whose existence seemed unacceptable to him, and he incorrectly believed that something would stop the collapse in time) or the expansion of the Universe (he was stuck in the static Universe).
But what I find equally important is that he was very rigorous about the stuff he was publishing. Before the 1920s, almost everything he published was correct and important. Most of it could be used today, in an unchanged form. Einstein was an immensely conservative physicist. He also viewed special relativity as a small refinement of Newton's classical theory - and in some sense, it is a correct description.
He could have done his discoveries not because he was dreaming about rejecting the previously reigning key principles of theoretical physics but, on the contrary, because he took them more seriously than everyone else did. Those dull hippies who keep on writing one foolish paper after another and who think that they're similar to Einstein because they want to eliminate the establishment are completely and entirely missing the point - all the points, in fact. Einstein was doing none of these things.
I don't think that Einstein's brain was as powerful as e.g. Isaac Newton's brain. But it was extraordinary enough so that with a sufficient amount of patience, discipline, and some good luck, Einstein could have become the most achieved mind in physics after Newton.
Even when we look at topics in which Einstein was wrong - like entanglement - we may notice that he was able to find new aspects of existing ideas that were later appreciated as important.

Biking Einstein in Santa Barbara. I bought and used the same bike when I spent H1 of 2001 there, too.

Because the following things are too well-known, I will omit his (tiny) role in the development of nuclear weapons; his unhappy relationships with the German universities during the Nazi regime; his life at Princeton; his social democratic politics; his materialist approach to the notion of God; or Israeli politics.
Happy birthday, Albert.
Luboš Motl v 2:23 PM
Share