The main web page of the Fermilab, www.fnal.gov, and one smaller page on the finding contain some extraordinary news. Because of the work of 700 CDF people such as Barbara Alvarez and 600 their temporary friends at D0, the Higgs mass is no longer unconstrained.

Between 160 GeV and 170 GeV, the God particle is absent at the 95% confidence level. In a broader interval, from 157 GeV to 181 GeV, Higgs is excluded at the 90% confidence level. That much could have been said because there were not too many (otherwise expected) Higgs decays, especially to WW (twice 80+ GeV), observed near Chicago.

Taking the 90% viewpoint, this combined result reduces the living space for the Higgs boson to the small interval between 181 and 185 GeV, or, which is more likely, to the interval between 114 GeV (the LEP lower bound) and 158 GeV.

Previous measurements have put the Higgs mass between 114 GeV (no direct production at LEP) and 185 GeV (95% confidence level from precision measurements) while a very weak excess of confidence may favor a Higgs near 130 GeV (see Tommaso Dorigo's blog).


I suppose that when you include supersymmetry, some of the bounds have to be slightly recalculated - but SUSY prefers a light Higgs, anyway: 130 GeV is a pretty much universal upper bound on the Higgs mass in MSSM. And your humble correspondent would choose 115-116 GeV - the hint from LEP's death bed - as the most likely figure.

For the Higgs mass below 130 GeV, the decay to bottom quarks and antiquarks dominates and I think that the Tevatron is capable to see the new particle here (maybe even more so than the LHC - so Europe could lose the intercontinental collider war for the Higgs but as far as I can say, we didn't build the LHC just for the Higgs: do you agree, Susy?).

For higher masses below the new 160 GeV bound, I am not quite sure what dominates but the decay to two photons is the most important one observationally and the LHC could see it, after all. The LHC is also good at seeing the decay to two tauons - it could observe it before the Tevatron sees two bottom quarks from the Higgs.

The excluded region corresponds to the dominating Higgs decays to two W bosons (twice 80 GeV) that were not seen in abundance, allowing the guys to exclude the region. Note that in the other, allowed, small, very massive window, near those 185 GeV, you start to get decays of the Higgs to two Z bosons (twice 91 GeV), too.

Prof Higgs has to hide in the underground between 160 and 170 GeV.

Of course, this is another Friday 13th news for people like Alain Connes who thought that the Higgs should be near 170 GeV: his noncommutative models are now falsified "more than infinitesimally". It's a good Friday 13th for physics and for waitresses in New Zealand, however.

If you remember our discussions about the reasons why supersymmetry should exist, you may want to be assured that by Bayesian inference, this press release itself has increased the ratio of probabilities that SUSY exists and that it doesn't by a factor of two or so: SUSY is significantly more likely than it was yesterday.

It's because the percentage of the remaining experimentally allowed parameter space that is compatible with SUSY has increased almost two-fold - a fuzzy version of a confirmation of SUSY's prediction for the Higgs mass. The new work has only excluded non-supersymmetric models or reduced their chances because SUSY, much like the experiment, also excludes the 160-180 GeV window.

Let me say a few words about the typical estimates of the Higgs mass. SUSY predicts the Higgs mass naturally e.g. in the 90 GeV - 130 GeV window. The bare Standard Model has a window between 150 GeV and 500 GeV if you require, for example, that the theory has a stable Higgs potential (the 150 GeV lower bound) and no Landau pole (the 500 GeV upper bound) up to the 10 TeV scale. Experiments now exclude roughly 2/3 of the SUSY window mentioned above and over 95% of the pure SM window: SUSY gives a significantly more acceptable prediction now. 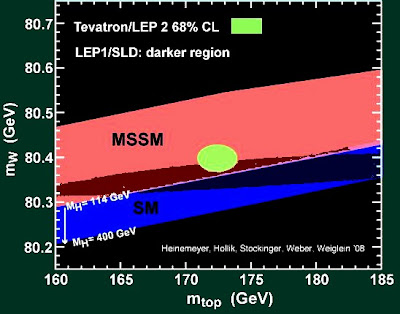 "A billion dollar plot" showing that high-precision measurements of the top quark and W boson mass favor MSSM over SM, too. Click the image to read John Conway's remarks about all the issues.

One could also consider the likelihood of some far-fetched alternative theories e.g. that the God particle doesn't exist at all but I have no rational reasons for such blasphemies at this moment.

With this change of odds and because of the significant correlation of the validity of SUSY and string theory, the experimentally derived probability that string theory is correct (divided by the likelihood that it is not) has jumped by about 50%, too. At the same moment, the average "critics" of string theory shrank from 5 feet to roughly 3 feet and it may become completely useless to stand on their shoulders.

Not bad for one day. ;-) But they would surely prefer to discover the beast rather than to improve the bounds.
Luboš Motl v 1:29 PM
Share