There are many culprits that were "shown" to cause global warming, including Michael Moore, Jane Fonda, homework problems for kids, and dark matter. 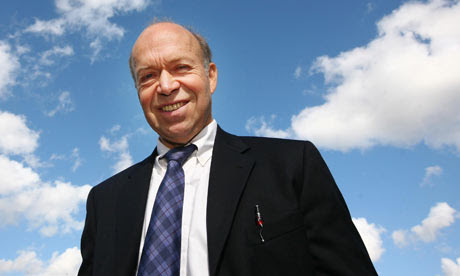 However, in an interview for The Guardian, NASA's climate chief has found the main culprit: democracy causes global warming. The democratic process is deficient because it prevents James Hansen from stopping the global economy and from saving the world.

I would infinitesimally admire Hansen for such original thoughts if they had not been invented by another, German thinker in the 1920s and realized in the 1930s and early 1940s. So I am sorry, Mr Hansen, you have to share credit and follow the historical rules of the game.


First, you have to write about Your Struggle where you outline your goals and strategies very clearly. Second, you have to receive 44% in the elections, while competing with dozens of other parties, and only 5 years later, you may start to realize your dreams about the world (or continental) domination which may last for two years or so (not really 1,000 years) if you happen to be equally skillful and popular as your famous predecessor.

Accept my apologies but if you skip one of the steps, you will remain what you are, namely a pathetic ludicrous eco-Nazi theorist.

Meanwhile, in the Czech Republic, the socialist and communist sweepings in the Parliament (plus a few coalition's traitors: 2 green women and 2 Civic Democratic men) managed to topple Mirek Topolánek's government tonight: they had 101 votes out of 198, exactly the minimum they needed. It was the first time in the history of the modern Czech Republic (since 1993) when the no-confidence vote ended with this result - even though right now, the government has one of the highest approval rates it has ever had. 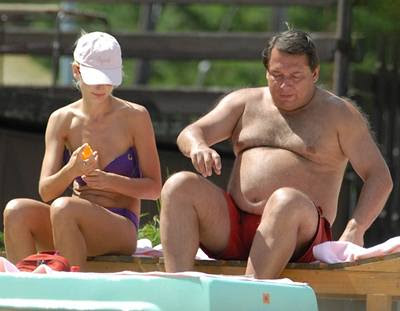 Mr Jiří (George) Paroubek, right, with his new wife, the glorious leader of the socialist opposition, managed to destroy the government of Mirek Topolánek during his 5th attempt to do so.

FAQ: The reason why she loves him is that he is sexy, especially his brain, she says. His surname is a short form of "Plnou Parou Back" which means "with full steam, back [to communism]". Joe Quimby is his twin brother unless it's himself.

Shattered Topolánek instantly declared that he would behave just like the constitution dictates. The same remark applies to President Klaus.

A sad example of the fact that real democrats like the Czech PM or your humble correspondent respect the rules of democracy even if the results are occasionally negative. Topolánek is likely (but not guaranteed) to continue as the boss of a provisional government until the early elections: President Klaus has the power to pick a new PM. An apolitical, bureaucratic pick would contradict Klaus's old principles.
On the other hand, Klaus is no enthusiastic fan of Topolánek himself - and especially not a fan of the green politicians who had to be included in the government. However, an attempt by Klaus to pick a more conservative politician than Topolánek would look unrealistic to me. Moreover, I don't know who she or he could be. ;-)
Paroubek has previously declared that he would allow Topolánek to complete the EU presidency. Paroubek and his boys (they were unable to find a woman for their leadership, even though one is dictated by their own rules!) are clearly not equipped to do politics at the European level.
Luboš Motl v 4:47 PM
Share