I've spent another day in Prague, talking to some fine and inspiring journalists and people I have known from my college years. One of the advantages of being an alumnus of the Department of Maths and Physics of the Charles University is that Prague seems to be covered by a rather high density of familiar buildings whose restrooms can be used rather freely and naturally. ;-)

In ice-hockey, Pilsen lost another match against Slavia Prague and our chances for the finals are becoming somewhat hypothetical.

Back to the Obama policies

Today, the foreign media have written a lot about the "political crisis" in the Czech Republic. Well, there's no "crisis".


Václav Klaus, who is just another guarantee that nothing really bad can happen, will accept Topolánek's resignation tomorrow and he will have the right and the pleasure to choose a new prime minister who will try to pass another confidence vote in the Parliament. That's a standard sequence of events that is not surprising in our political system in any sense. Also, it is completely unrelated to the current global economic havoc, despite loads of stupid or downright dishonest journalists who suggest otherwise (a full-fledged journalistic waste: they must know very well that they're making this bullshit up).

The socialist opposition has tried to do the same thing 4 times in the last two years and the reason why they succeeded this time is related to some very local and personal issues and individuals who are not known outside the Czech Republic. The no-confidence vote has reduced the odds that the Czech senate will pass the Lisbon Treaty (expected revenge of the conservative Senate to the pro-Lisbon socialists!) but that's surely not a disaster by itself. By the domino effect, the events may also stop the U.S. radar system (which is facing tough hurdles in the U.S, too).

A worse situation would occur if Mr Paroubek, the fat socialist opposition leader, would become the new prime minister. But such an event wouldn't be a "crisis" either. First of all, we have already survived a year or so when this idiot was the chief of our government. Second, it wouldn't be a "crisis" but rather a chronic, temporally distributed, persistent, but not lethal problem for our homeland.

At any rate, he is not becoming the prime minister yet and he has already declared that he wants the current or similar government to complete the EU presidency ("in the state of resignation") because his party (focusing on dodgers of payments and similar segments of the electorate, according to his own words) is understandably unable to fulfill any of these tasks. 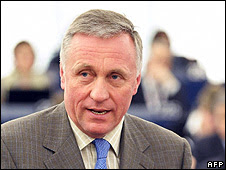 First of all, a translator incorrectly translated Topolánek's sentence that originally said that "someone will always buy the U.S. bonds". The translator said that "someone would always buy the U.S. bombs and weapons in general". That was an amusing mistake that was corrected before the WW III began. :-) By the way, Czechia is among the world's top exporters of weapons, too.

More importantly, it has also been written that Topolánek considers Obama's policies to be a "road to hell".

Full speech here; English transcript. You may also see this video including a passionate comment by the EU socialist Führer. :-) Check also the Russia Today's idiosyncratic report, comparing Bush and Obama: they also correctly talk about a "limited sovereignty" of Czechia within Europe (but we do have the freedom of thought and speech now, unlike many "sovereign" peoples).

Well, if you're reading this article with the goal of escalating the diplomatic tension between the EU and the U.S., or if you want to damage the influence of the Czech Republic in the international context, you should know that Topolánek has probably not used these words. And you should stop reading at this very moment.

If you're an open-minded reader who is actually interested in reality, you should know that Mr Topolánek probably didn't say that the policies were a "road to hell". I guess that at least in the private context, he may have said that the combination of the stimuli and the protectionist & "Buy American" policies (and their declared "permanency"!) repeat the mistakes of the 1930s and are a "road to the asshole" ("cesta do prdele") or "a way to the crapper" ("cesta do hajzlu"). And he's damn right! :-)

This is what I could predict based on my extended linguistic knowledge of the prime minister's opinions and colorful vocabulary. :-) Incidentally, Barroso's EU Commission seems to agree with Topolánek.

(Sorry, the comment about Topolánek's slang is a joke! On the EU podium, he said "hell", of course.)

I am among the people who were already observing the state of economics and rhetorics about it during the previous recession, from the bursting dot-com bubble to the fall of Enron. The economy was being stimulated - mostly by modest tax cuts "for the rich" which was a relatively (in comparison with the present ideas) wise approach by George W. Bush. The idea has always been that the increasing debt can be paid back during the better years. Up to a certain amount, the economy can afford such irregular spending plans, whether they're wise or not. However, there's another, bigger downturn which came about 7 years later. If you assume that this figure is a realistic estimate of the frequency of similar downturns, the rate with which the U.S. debt has been increasing was clearly above the long-term abilities of the U.S. economy to pay it back.

As the President of Harvard University, and even much more recently, Larry Summers gave many talks about the dangers of a growing U.S. debt: see e.g. Charlie Rose 2001 where Summers blames Bush's tax cuts for the huge deficit. $400 billion was described as a gigantic deficit that was threatening the very health of the U.S. society. Quite suddenly, Summers is Obama's top economic aide who is overseeing a budget deficit that is bigger by a factor of five or so. And he has to shut up.

Richard Feynman was ahead of his time when he argued, in the 1980s, that numbers like one trillion should no longer be called "astronomical" because they're less than the U.S. deficit. They should be called "economic" numbers. :-)

You know, Larry, four years ago you coughed up $50 million to obnoxious and dishonest feminist ... women ... but now we're talking about trillions. The change in the order-of-magnitude estimate doesn't seem promising to me.

Is Dr Summers actually believing that these big numbers no longer matter? Does a factor of five change anything in his appraisal of the reality? If the factor of five that inflates all the previous records is justified by something, could you please give me the calculation resulting in the number five?

Five years ago, the U.S. budget deficit was just another whip that various Bush-haters were using to "beat the dog". When Obama is in the White House, these people are suddenly silent even though the "sin" was multiplied by five. Is it fair to say that this hypocrisy is statistically significant even according to the particle physics standards? ;-)

What matters here is not the name of the U.S. president or his party but the ability of the country to stabilize the debt. Right now, the trade deficit (the other part of the "twin deficits") is reduced because the imports have shrunk dramatically. But this fact is linked to the equally reduced ability of the U.S. economy to produce things and pay the debt. When the GDP growth returns to the long-term values, the trade deficit will become huge once again (unless the dollar drops by a factor of two or more, which would lead to an exit from the bonds, too).

The frequency of economic events that are claimed to be "extraordinary" enough to justify extraordinary spending programs has become so high that it is no longer sane or honest to call these events "extraordinary". Responsible politicians should abandon these spectacularly inflated, misleading adjectives. It doesn't seem that it is politically correct in the U.S. to be a responsible politician these days. Instead, it is politically correct to endorse Obama's irresponsible policies because any other attitude is unfortunately viewed as a blasphemy, i.e. as doubts about the national messiah.