James Hansen and dozens of radical organizations plan to express their civil disobedience and obnoxiousness tomorrow, on Monday, in front of the Capitol Power Plant in Washington, D.C. that transforms coal to energy for the U.S. Capitol (map, directions, Google News).

On the page with directions, participants are encouraged to dress the best clothes they have (according to an aptly named website, "It's getting hot in here"), to survive a few hours without drugs, and to bring USD 50-100 which is the usual amount for these hippies to get out of jail at similar events.

Let's see whether 0.03% of his "grant" from the Kerry Heinz Foundation will be enough for Mr Hansen, too. The Earth is going to fry soon, they will surely tell us again, while trying to peacefully cripple the power plant. 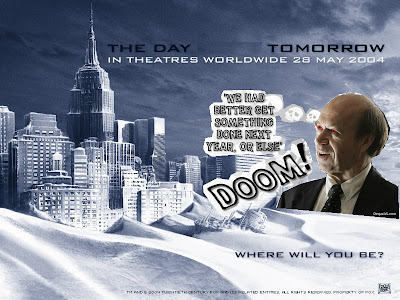 Meanwhile, in the real world, Weather Underground predicts that D.C. will experience -11 °C on that day which should break the record low temperature for March 2nd, -10 °C, that was measured in 1925, before the previous Great Depression. ;-)

You know, 1925 - when the previous cold record occurred - was in a slightly different era. An August 1925 KKK parade in D.C. attracted 400,000 participants (click at the picture below): the 2009 KKK rally in Alabama seemed to be more modest. Will Hansen beat his predecessors in the 1920s if the weather beats the March 2nd, 1925 record cold figure? 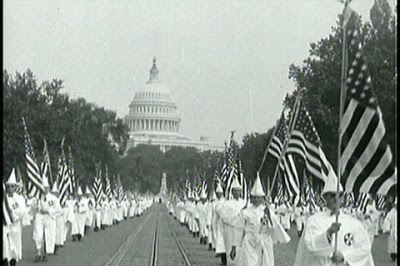 A winter storm warning is in effect between Sunday 2 p.m. and Monday 2 p.m. so theirs could be a pretty "cool" event. :-)

New snow is very likely, too. Total snow accumulation should be between 5 and 9 inches which could make the pictures of the anti-global-warming rally "cute". I wish the passionate believers a very warm afternoon and a functional heating system in the prison. :-)


This is about the 17th time when Nature enjoyed/enjoys mocking the AGW fear promoters. God has a sense of humor.

The organizers "pushed through the snow" (up to 9 inches), chatted about drought in TX and CA, don't plan to cancel the event, and expect 2,500 idiots to show up (it's a whole IPCC!). 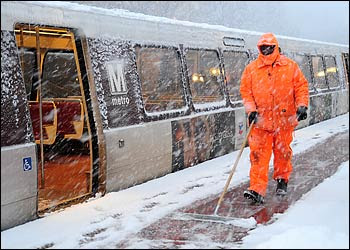 A metro employee is clearing and readying the platform for the 2,500 freezing hippies in tuxedos.

Now the live video started. Dozens of hardcore activists seem to be freezing. No tuxedos. :-)