On March 14th, 1939, one year and two days after the Anschluss of Austria, the Second Republic of Czechoslovakia disintegrated when Slovakia became an independent satellite of the Third Reich: their alternative was to face an occupation by Hungary in a few days. At least, that's what Hitler told them. The Parliament voted for the independence unanimously.

See what The Telegraph wrote 70 years ago.

One day later, on March 15th, Hitler occupied the rest of Czechoslovakia, creating the Protectorate of Bohemia and Moravia. The foreign policy and security was transferred to the Reich. Currency and tariffs were unified with Germany. German citizens of the Protectorate became the citizens of the Reich while the Czech citizens either became obedient servants of the new, politically correct regime or were executed.

This is what Václav Klaus wrote about the event today: 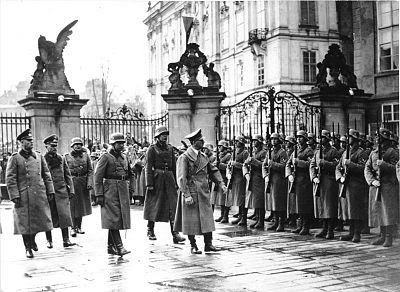 On the tragic anniversary of March 15th

Tomorrow, it will have been 70 years since the moment when the curtailed fragment of the Czechoslovak Republic was occupied and when Adolf Hitler announced the creation of the Protectorate of Bohemia and Moravia on the Prague Castle. That moment initiated a long era of totalitarianism that lasted, with a short, three-year-long interruption after the war, from 1939 to November 1989.

The liquidation of the Czechoslovak torso was another event in a long sequence of Hitler's easy triumphs that were allowed by the appeasement policies of Great Britain and France. It was therefore no surprise that both countries were able to do nothing more than to formally protest even though - and this fact is not being emphasized in Czechia too often - these two countries were bound by the Munich Treaty to co-guarantee the borders of the torso of our country that was left out of the original Czechoslovakia after the Sudetenland was annexed. It turned out that they had never cared about our country much.

Moreover, the Western capitals were twinging: the Treaty of Versailles suddenly seemed as too tough a humiliation of Germany. People began to doubt the value of uncertain alliances with the Central European neighbors of Germany (or even of the attempts to make this alliance stronger than Germany) because it could have been far more efficient to agree with Germany how the continent should be governed. Not even the Nazis' victory in the early 1930s turned out to be an obstacle that would have stopped this illusion. The Western democracies even believed that it would be easier to reach an agreement with the new, authoritarian regime than it had been with a Weimar-type German democracy. This meme belonged to the logic of appeasement, too.

Hitler understood this logic rather quickly and skillfully exploited it. At a first glance, all his declared goals therefore looked adequate. It looked like that the only thing he demanded was for his country to be treated just like other superpowers and for the German citizens to live in the same country. Britain and France wanted to believe his sincerity. The first thing they sacrificed were the restrictions on the German military and economic power, as imposed by the Treaty of Versailles. The second gift they offered was Austria. And in Munich, they also abandoned their faithful and loyal ally, Czechoslovakia. The principle that the Germans outside Germany should have the right to decide about their fate, an idea that was rejected in Versailles, looked like an obvious, politically correct tool - using today's jargon - for the Nazi dictator to win concessions from the Western powers. 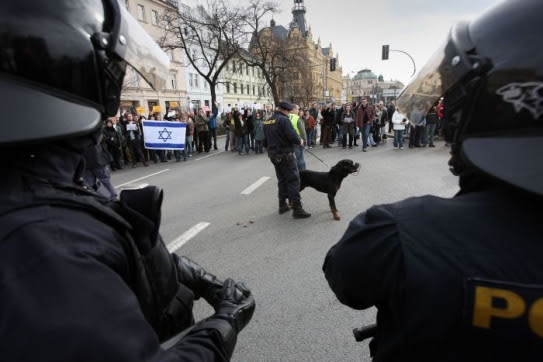 Czech Nazis had another rally in Pilsen today. I didn't look at it because I saw it one year ago. Their mental processes are not comprehensible to me. Click the picture for more photos.

However, Hitler didn't care about any permanent treaty and co-operation. He was pursuing his maximalist world-dominating goals and individual concessions that he won from the Western powers were nothing else than steps towards another level of demands.

However, March 15th, 1939, was a step into a new realm. The liquidation of the Czechoslovak torso was Hitler's first open, unconcealed breach of the legitimacy of the claims that the Western powers were ready to endorse. In a violent manner, Germany annexed a country that had been inhabited by a non-German population, a territory that had moreover never belonged to Germany. By these decisions, he made it very clear that it was never his goal to undo the post-war wrong-doings. Instead, he wanted a hegemony and dominion over Europe. The concessions that had been acknowledged earlier were suddenly placed into the proper light - they became a short-sighted defeatism and a shamefully immoral naivité that didn't hesitate even to betray an ally. At that moment, Britain and France finally decided to stop the concessions to Germany. That's why Hitler's subsequent claims against Poland didn't lead to another "Munich" conference of the European powers but rather to the British government's security guarantees for Poland. The path to the war was wide open. Click for a YouTube documentary video in German: almost all Germans (5% of the population of the truncated Czech lands) celebrated.

For our nation, March 15th was the fall to the very bottom of the sea. The army was prevented from action for the second time in less than six months. The ill-fated and sad president Dr Emil Hácha, who was forced - by Hitler's brutal psychological pressure - to surrender the Czech lands to the hands of the Reich Chancellor in Berlin - became a symbol of our humiliation much like the German military units on the Wenceslaus Square (picture above) and Adolf Hitler looking at Prague from the windows of the Prague Castle (picture below). The Czecho-Slovak relationship didn't come through, either. By its own choice, Slovakia became a German satellite while the Protectorate was given a quasi-colonial status. 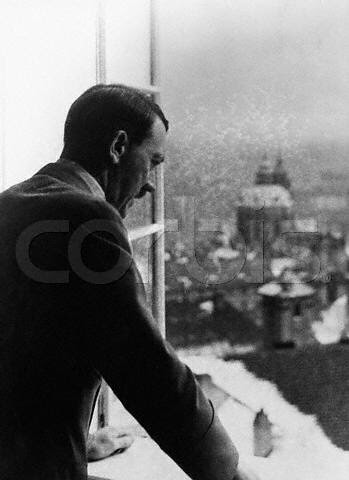 March 15th also meant the end of the so-called Second Republic of Czechoslovakia - an abhorrent six-month era when the worst features of the national character bubbled to the surface, in the form of manhunts against the democrats, servility and sycophancy towards the adjacent power, trampling on the heritage of the First Republic, and restrictions on democratic freedoms. The Germans didn't care about any political alliance with the Czechs. The Czechs had no place in the "new Europe" led by Germany.

The March 15th, 1939, started the most tragic chapter of our modern history. The experience from that day and from the subsequent years of occupation has influenced the historical memory and political stances of the citizens of our country for long decades. The event has even contributed to the decision of numerous citizens to abandon the democratic tradition of the First Republic and to surrender to the temptations of the communist propaganda after the war.

That's why I find it necessary to remind us of the sad 70th anniversary. This chapter of our history has influenced our lives more profoundly than the current generations realize. 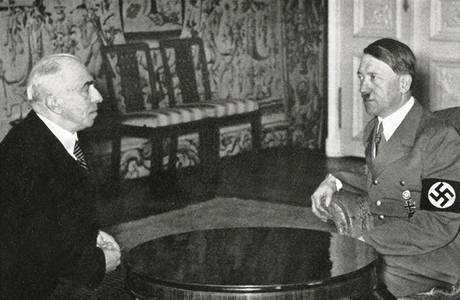 LM: By the way, the Czech media report some details about Hitler's day in Prague 70 years ago. He was in his top form, behaving as a friendly boss of the Prague Castle, inviting the Czechoslovak president there (see above). He had some Prague ham and Pilsner Urquell, saying it wasn't excessively bitter. German troops, enjoying a strong exchange rate of the Mark against the Crown at that time, ate almost all chocolate, cakes, and drank coffee in the Czech lands - things that were already unavailable in Germany of that time.

He ordered the Petřín tower - Prague's small version of Eiffel's Tower - to be torn down (which didn't happen) because it aesthetically interfered with his view from the Prague Castle. Wehrmacht ate his dinner. By his seemingly polite behavior, he was able to take over the Czech industry, increasing the military production by 26%. French generals argued that it would still be easy for them to defeat Germany which wasn't quite right. ;-)

Hitler returned to Berlin as a hero, of course.

On March 15h, 1939, Hitler came to Prague from Česká Lípa (Bohemian Lime Tree, the Czech national tree) - which is paradoxically the name of a town that belonged to the Reich at that time (Sudetenland) - because it was the closest "German" town to Prague and he wanted to avoid delays on Czech roads and be in Prague ahead of Hácha. A major ex-GF of mine, a relative of the 19th century Czech painter, Josef Vojtěch Hellich, was born in Česká Lípa and amusingly enough, she works for a German protestant church these days.

I just learned that I had believed one myth, namely that Hitler quickly introduced driving on the right side. The reality is that the reform was getting ready throughout the 1930s, by the democratic government, and it just happened that the switch was planned for March 26th, 1939, and not even the occupation changed anything about this new policy. 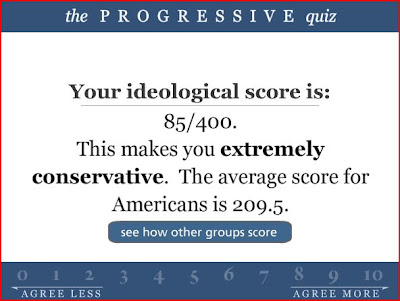 Unrelated but political: your humble correspondent got a much better score than the average Americans but he is still more moderate than the progressive 335-types. (How could I have survived among them for such a long time, despite the difference of 250?) Find your score, too.

In the Czech ice-hockey extraleague, HC Lasselsberger Pilsen won the quarter final. In the 7th match against HC Moeller Pardubice (3 won matches would normally be enough!), Adamský scored to close the score 4:3 in the 87th minute (normal matches only last 60 minutes!), converting a pass from Martin Straka (formerly in New York Tangers) who was simply extraordinary.
Luboš Motl v 10:31 AM
Share