Klaus: Notes from a U.S. trip

CEI meeting: Is Capitalism In Crisis?
ECO:nomics conference: Is Environmentalism a Bigger Threat to Humanity than Global Warming?

Despite the long hours, one can't see much from the window. There is only one dominant thing that is so huge that it cannot be overlooked. It is nothing else than Greenland, a "green land" which is however, even in the era of the purported global warming, an empty white wasteland of ice and snow. That's a different situation than in the Medieval Warm Period, between the 10th and 14th century, when agricultural soil was being tilled at many places of the island. In those old times, people were not emitting much CO2 into the air. One could dare to think that other factors than CO2 were influencing the global temperature. But I am going to attend a global warming conference, so I should perhaps avoid blasphemies in advance.

I am flying to Obama's land ("Obama's nation" is what we can read in the newspapers) that is torn apart. No other president (in the living memory) was able to create such expectations during the presidential campaign (and I am not sure whether this fact tells us more about Obama or about America). And since the Great Depression of the 1930s, the economic reality hasn't deteriorated so steeply and deeply as it did recently. The gap between the expectations and the reality is reaching the maximum conceivable values.

The expectations are quickly shrinking (but not in the minds of fanatical anti-Bush and fanatical pro-Obama folks) and the reality is not indicating a slightest turn for the better. When President Obama presented the basic features of his financial 2010 budget at the end of February 2009, it was very clear that the end of the Reagan revolution has arrived (even though one could have already expected it from the growing government expenses during Bush's 8-year epoch). Instead, the society is returning to Roosevelt and maybe even L.B. Johnson (and his "Great Society").

The former finance minister, who is still hiding inside me and who used to be attempting to balance the budget (despite the fact that our transformative downturn in 1990-1993 was deeper than the current U.S. recession) can't believe his eyes when he sees that the budget expects the revenues comparable to 2.4 trillion dollars and expenses around 3.6 trillion dollars. The deficit is going to be be close to one half of the budget! Compare these numbers e.g. with the Maastricht criteria that the EU member countries have to fulfill!

However, the Californian "American Riviera" is very pretty. Moreover, the Pacific Ocean is much more powerful and respectable than the Mediterranean Sea. From San Francisco to Monterey (which I associated with Steinbeck's Travels with Charley) to bohemian Carmel (with Robinson Jeffers' Hawk Tower) to beatniks' Big Sur, the subtropic climate is dominant (today, it is 17 °C or 63 °F in Santa Barbara, the grass is green, and flowers including lavenders are blossoming). Visitors from Central Europe are surprised by the Spanish colonial architecture with little churches that are indistinguishable from the Mexican ones. The Sun is shining above Santa Barbara for 300 days in every year.

Because California is experiencing drought, Governor Schwarzenegger is planning water rationing. When I was visiting nearby Newport back in 2001, it was necessary to introduce electricity rationing. I was surprised that while living in a university building, the lights turned off at night and the heating system stopped - even though it was in January. It's no coincidence. California has always been an extreme bastion of the American Left. 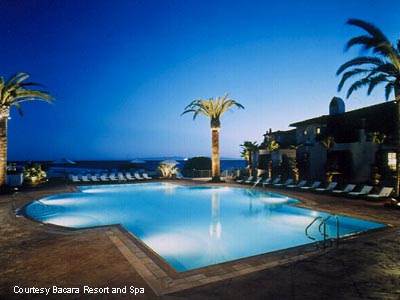 The Bacara Resort conference center is beautiful but expensive. The director of one institute in D.C. - that is allied with our CEP - wrote me that he wanted to visit the conference in order to support me but he concluded that the visit would be too expensive for a conservative man.

I will survive there for two nights - for the money of the organizers from Wall Street Journal. Let us hope that they will survive, too. 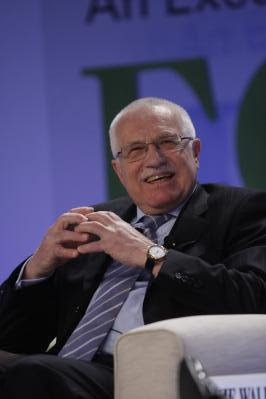 Click the picture for a summary of the conference in Santa Barbara Independent. It is almost entirely dedicated to Klaus.

I am waking up in a hotel that is located a few meters above the sea level. The Pacific Ocean is relatively placid, the morning is very cold, but blooming shrubs, flowers, and trees indicate that the weather will be much nicer later in the day. 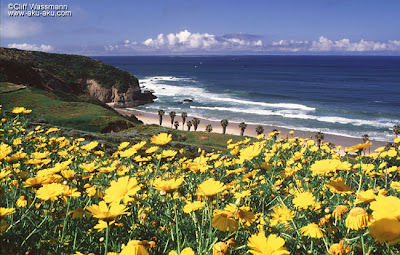 The organizer left a back-pack in my room (surely much like in the rooms of all other participants) with a small solar panel allowing a tourist to recharge the cell phone battery during a hike in the mountains. Besides the panel, the back-pack also includes a small wind turbine whose purpose is probably similar. There is also an energy-efficient light bulb, an electric air cleaner for the rooms (against allergies), a complex gadget to measure the electricity consumption in your home, and especially a warm shirt (because the heating should be reduced to save the energy). But it would be enough not to invent any new things and employ a device that was invented a long time ago and whose name is a doorsill - without it, there is an half-inch-thick interspace everywhere and the air is blowing through it terribly. 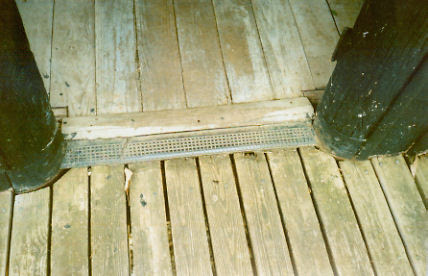 The second day of my visit is dedicated to the so-called ECO:nomics conference, organized by the Wall Street Journal. The name is a pun combining the words economic and ecology. Our environmental minister Mr Bursík would love the event while the people of my kind are in a minority here. Fortunately, Bjorn Lomborg is attending, too. He accepted my invitation to a collective presentation including Al Gore. However, Gore avoided it one week prior to the conference and he chose to speak one day earlier, when I would still be in the airplane. This is called an open debate and listening to others.

The main participants are representatives of big U.S. corporations trying to find their future in a "green economy" subsidized by the government, more precisely by the biofuel and electricity consumers, and by the taxpayers. Together with them, some well-known names of the green establishment are here, too. The belief in the powers of the state and the disbelief in the markets are dispiriting. In spite of that, it seems that I succeeded in selling my opinions: about Europe, about the crisis, about global warming. It is being shown that the silent majority is different than the loud minority. This observation holds in the whole world, after all.

Honorary Consul of our country, a born American with Czech parents, Mr Pivnička (pronounce "piv-ni-kah", not "piv-nich-kah"), invited us for a lunch in a famous Californian region with wineries that is receiving, let's admit, more solar radiation than Southern Moravia (a wine-producing region in Czechia). An obscure wine shop has a Slovak waitress who also invited two Czech girlfriends of hers, too. The world is really small. The landscape with hills near the ocean is immensely picturesque.

A medical research foundation invited me to the very luxurious local golf club for the dinner. They want to hear a dinner speech from me, titled "Is Capitalism in Crisis?" I am saying that it is not in crisis but it has a crisis. However, I am aware that political-social-cultural pressures of the recent decades have substantially modified capitalism. We may already be elsewhere, even in the U.S.

President Obama has bewitched the Americans. His "Yes, We Can" exactly expresses the American idealism, people are talking about this slogan during random encounters. Even Ms Consul (his wife), a staunch Republican, was voting for Obama because of this offered hope. I am explaining them than in Europe, they couldn't get away with something like that.

P.S. In the hotel room, I am watching TV and it almost looks like they had seen my manuscripts - there is an impressive commercial promoting doorsills. They save at least 30% of the heating expenses, the ad says. I wrote the initial part of these notes a few hours ago.