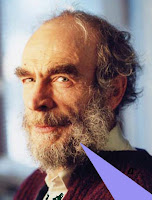 He has studied the asymptotic and large-scale effects in various geometries, the metric on the space of metrics, the triangle inequality in many contexts, hyperbolic groups, and life.
The last word may seem out of place but he has shown that with a certain criterion to determine whether a sequence of chemicals is "alive", most of them are actually alive - a result that I surely find surprising (but I don't know his definition of "life", so the paradox is not sharp).
Obviously, string theorists know him as a colleague mostly because of the Gromov-Witten invariants, rational invariants counting pseudohomolorphic curves in a manifold that can be calculated from a generating function and that are closely related to the Gopakumar-Vafa invariants.
The worldsheet instantons guarantee that their generating function is nothing else than the genus "g" partition sum of the topological A model, a simplified version of perturbative string theory.
Many other theorems and structures are named after him.
Luboš Motl v 7:47 AM
Share