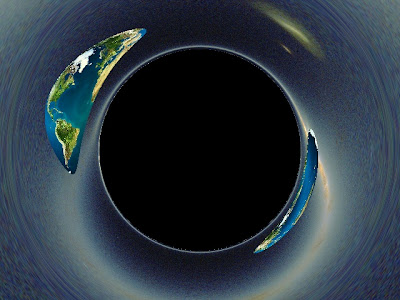 Black holes are clearly the most typical localized objects where the general relativistic effects show their muscles. Again, there is a whole website with videos and animated GIFs showing what the observers see when a Schwarzschild black hole is nearby:

Let me offer the following specific links to videos and animations:The website and the preprint remind you of all the important phenomena that influence these situations.


Most importantly, gravitational lensing "repels" the image from the center. Point-like objects right behind the hole are seen as "Einstein rings". The regions that "repel" the objects (in front of you, and behind you) become red-shifted while the "horizontal plane" gets blue-shifted. The bending light rays allow you to see both poles of the black hole horizon (red grid).

Orbits become unstable at some radius, see a simple Mathematica notebook of mine or Kepler problem in GR to be reminded of unstable orbit formulae, and at the distance of 3/2 Schwarzschild radii, photons can orbit the black hole, too. But because this orbit is also unstable, they don't accumulate there.

Possible mistakes in their work

The animation showing how you cross the horizon - and the page with Penrose diagrams that explains why the horizon splits into two at this moment, according to Hamilton - is unfortunately unavailable.

Frankly speaking, I don't know this effect and can't derive it immediately and if I were completely honest, I would say that I think that the authors have made a mistake and incorrectly doubled the triangle in the black hole interior by adding a "left image" with the second horizon: the preprint surely contains some unusual diagrams, to put it politely. The correct Penrose diagram has a vertical boundary on the left side. You may also double it by adding an image of the whole diagram, not just the black hole interior, with respect to this axis but you must realize that the pairs of points on the opposite sides of this axis are connected, being antipodal points on a two-sphere.

Such a mistake of theirs might explain why the URL links are broken and it would raise some doubts about all of their animations, especially those from the black hole interior.

Back to other effects

Binocular vision would be no good to detect the distances. They suggest that if animals evolved near black holes, they could develop three eyes which would be enough. ;-)

There's no darkness inside the black hole. Depending on the speed of your jets, you see the external Universe as a bigger or smaller disk (or point). Tidal forces will tear you apart before you get the opportunity to probe the singularity at the center.