Pen Hadow: freezing in the Arctic

This blog already contains many stories about naive viewers of Al Gore's movie who came to the Arctic, expecting a nice weather. These people will never learn anything. Their influx to the Arctic is guaranteed to increase because only two things are infinite - the Universe and human stupidity - and the first thing has already been seen to be spatially finite. 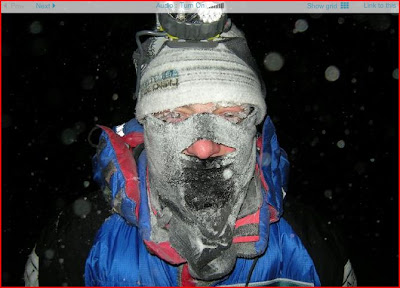 The newest addition to this bizarre collection of characters are three British explorers: Pen Hadow, Martin Hartley, and Ann Daniels. They took their sunscreen, swimming suits, and sunglasses and went skiing to the North pole, trying to prove that the place will soon become ice-free in the summer. ;-)

I am convinced that the skeptical readers have the right to enjoy the colorful whining of these crying nutcases. :-) So let me copy something from an AFP report released three hours ago:

"We're hungry, the cold is relentless, our sleeping bags are full of ice and, because we're not moving, the colder we get. Waiting is almost the worst part of an expedition as we're in the lap of the weather gods. This is basic survival."

Well, he may be a smaller coward than the quotation suggests because the temperature over there is -40 °C i.e. -40 °F: see the current conditions over there: yes, they only make 1 mile per day. Not exactly impressive athletes. 600 miles remains to the pole. With their speed so far, it would take two years to get there.

Update: See the status as of April 10th. The speed has increased a bit but the odds still seem rather low.

Two weeks ago, Hadow forgot that a chocolate could be frozen and he cracked his tooth. :-) Because of bad weather, they won't get the re-supplies today so they're down to half rations. Update: One day later, the airplane should arrive on 16:30 EDT. Yes, they finally received the re-supplies, although 45 minutes later (quite a carbon footprint).


Once AFP is finished with their story about these hapless "researchers", their logical conclusion says:

Global warming is believed to be the main culprit in the rapidly melting north polar ice cap that is freeing up new sea routes and untapped mineral resources on the ocean bottom.

Nice job, AFP! The expedition that will teach three British grown-ups that the Arctic is really cold - brrr - is called "Catlin Arctic Survey" and costs 4.3 million dollars. That's a rather expensive private education for the subset that will survive. Let's hope that the nice polar bears in the area will find the remaining ones yummy.

Video via Rae Ann: only the humans are the black sheep who are able to hurt other animals by sophisticated technologies. The other animals love each other. Or do they? ;-)
Luboš Motl v 9:57 PM
Share