Sorry for the multi-day passivity. I was giving a climate talk to curious, clever, and spontaneous teenagers at a Pilsner high school, an interview about Nikola Tesla's secret inventions for a Czech radio, making various visits, writing some non-blog texts (including an article about the Eurospeak for a leading Czech daily), and (an hour ago) watching an amazing victory of the Pilsner ice-hockey team against Slavia Prague (the winner of the initial part of the season), 6:0, in the first game of the semifinals (in Prague!), brought mostly by the amazing Martin Straka's academy and perhaps also by cryosaunas (using vapors from liquid nitrogen at -120 °C or so) that probably juvenilized and energized our city's team. Be right back.
N. Sriram has brought my attention to a newly posted interesting TED talk by the Duke (ex-MIT) behavior economist Dan Ariely:

He talks about the "predictable irrationality". First, he recalls his experience from the hospital. He was burned and when the nurses were removing the patches, he found out that they did it faster than the optimal rate at which the integrated pain is minimized, despite assuring him that they knew what they were doing. ;-)

I suspect that a rational explanation may be hiding here, too. The nurses just don't enjoy to play with a semi-crippled economist for two hours. ;-)


Update: at the very end, he confirms this point exactly. However, he also adds that the nurse sincerely believed that she was right and she didn't want to do a demanding experiment testing whether she may have been wrong. It follows that:

We should not be afraid to test our intuitions scientifically.

In another segment of his talk, he analyzes how much people like to cheat. You would think that they cheat in order to optimize the difference (or ratio) of the benefits of cheating on one side, and the probability of being caught on the other side (or whatever is the right function increasing with the first variable and decreasing with the second variable). 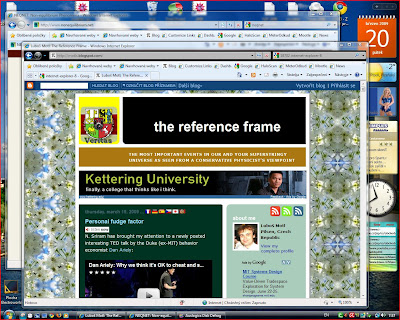 However, observational data indicate this not to be the case because the amount by which people like to cheat doesn't significantly depend on the expected benefits or the probability of being caught, according to his measurements.

Instead, it is pretty constant for each person: it is a personal fudge factor. This quantity defines the width of the allowed interval in which the people still feel good about themselves: so the quantities that determine the amount of cheating are not objective external quantities processed rationally but rather conscience.

For example, James Hansen's personal fudge factor is about 1,000% as one can see by comparing his predictions of ice melting with the result calculable from the data that are available to him. The Bible restricts the people's fudge factors: once we talk about the ten commandments, people - both believers and infidels - generally stop cheating.

Ariely has also tried another experiment: his subjects were not given money for cheating but rather tokens that could be exchanged for money a few seconds later. ;-) Rationally speaking, the amount of cheating should be exactly equal. However, because the people were separated from the hard money for a few seconds, it allowed them to double their cheating! :-)

Of course, he believes that the securities etc. are much like these tokens - because they're not "obviously" money so it's not such a serious "sin" to twist them - and they increase the level of cheating, contributing a factor to the stock market turmoil.

In another scene, an actor was inserted to the test group. His acts and subsequent events made it clear that one can get away with cheating. Did it increase the amount of cheating by the test group? The answer depends on who is the actor. If he is a member of our group, we associate with him, follow his behavior, and increase cheating (groupthink). If he is a member of another group, we try to keep the distance from him, and the cheating goes down.

It may be useful to learn all these rules in order to understand people's imperfect and dishonest behavior a little bit more accurately.
Luboš Motl v 7:08 AM
Share