A Nobel-prize-winner-watching trip to San Francisco becomes a science-fiction-actress-picking trip in the train. Much like with Missy, Rajesh is stellar while Howard and Leonard suck. 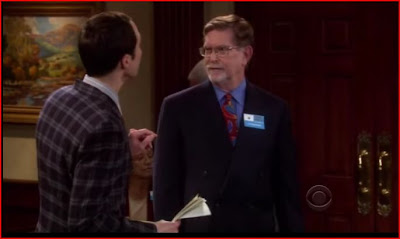 The success of the show is documented by the fact that Summer Glau is starring as herself, and so is George Smoot, a 2006 physics Nobel prize co-winner. Even though Smoot has taught string theory at some moment, he wasn't impressed by Sheldon and his work on astrophysical probes of M-theory effects in the early Universe - and he didn't even hear what the work was: Sheldon's plans how to receive another Nobel prize were enough. ;-)

If you want Jim Parsons (being Sheldon, possibly based on a certain European physicist) to be nominated for Emmy, try to help Alynda Wheat.
Luboš Motl v 2:52 PM
Share