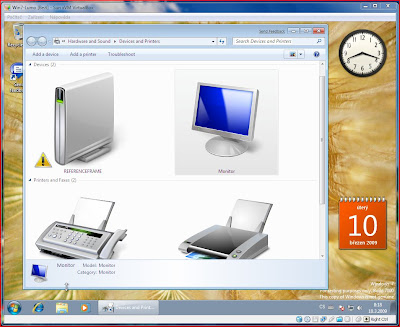 Click the thumbnail to see a gallery of 47 screenshots.

The virtual physical hard disk is represented by a VDI file on the host machine: the VDI file with the whole hard disk with Windows 7 and data never went above 5.5 GB. External CD/DVDs, for example one with the ISO image with the Windows 7 installation, can be read from ISO files on the hard disk of the host machine. And the right-ctrl key can steal the keyboard and the mouse from the virtual parasite computer back to the host (and back). The embedding framework operates smoothly and there are no serious risks going on here.


Windows 7 is nice. It is a "wealthier" relative of Vista. When you use Windows 7, it is very clear that you don't have to learn new things. Certain things are more logical; in some cases, the "progress" went "sideways" rather than forward.

Its user interface is very similar to Vista. If you shake a window, it minimizes all other windows. If you cross the left/right/upper end of the screen with your mouse pointer, the window (semi-)maximizes to the left 50% / right 50% / whole 100% of the screen: a fast and helpful trick e.g. for translators. Windows can be un-maximized simply by dragging them.

Windows Explorer is similar to that of Vista. Superlarge "icons" are available, as the screenshot above shows. The control panel is reshuffled a bit, with some new groups ("Action Center" with all the update/security-like actions recommended by the computer). And it has some completely new entries, too. On the other hand, some programs are no longer parts of the operating system.
The screenshots show much of the installation, a key to temporarily activate the Windows 7, and some basic work with the system. Of course, the last screenshot brings you to a happy end: a blue screen of death. However, it may have been caused by the Virtual Box.
Luboš Motl v 8:36 AM
Share