Correlation of sunspots and sea level 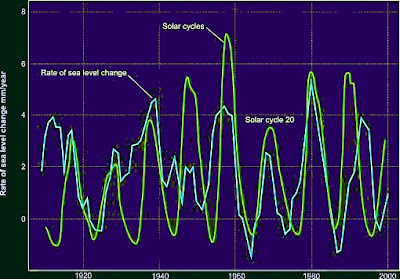 Click to zoom in. Did they ever fit together? Most ridiculous thing I ever heard. :-)

The graph shows a remarkably accurate correlation between the number of sun spots - following the approximately 11-year solar cycle - and the annual sea level rise in millimeters.

See pages in Colorado to download the sea level data from satellite altimeters etc. and a previous posting about the sun spots for links to the solar data.


To draw it, Archibald had to calculate the "derivative" of the usual graphs showing the sea level itself, as a function of time (years).

In the real climate, the solar activity seems to influence the sea level rise. As you can see, something is usable out of the ardent & concerned writers' website: the logo.

I would bet that such a tight correlation simply cannot be a coincidence. There's no independent reason for such an accurate "11-year" cycle in the sea levels that would moreover happen to be synchronized with the sun spots. If you know about an alternative explanation of the 11-year cycles in the sea level rise, let me know: I am very curious.

My explanation suggested by the picture is the obvious:

This theory seems to make perfect sense to me. But we will have to wait for some time to see whether the correlation and synchronization survives.

At any rate, the Sun seems to have a huge effect. The graph suggests that solar activity changes the annual sea level rise from a minimum around 0 millimeters per year to a maximum around 5 millimeters per year.
The average trend, around 2.5 millimeters per year in the time interval of the graph, is caused by slower effects - including the Milankovitch cycles and the enhanced greenhouse effect. But you can see that the solar activity is as big as all these effects combined.
What I mean by the previous sentence is that if the solar activity drops to zero or near zero, e.g. for two decades, the sea level rise will also be zero or slightly negative, indicating a modest global cooling - regardless of the origin of the slow, currently warming underlying trend.
Needless to say, after some time, the underlying slow processes will switch to cooling, too.
In a few millenia or so, the Earth will naturally begin to return to another ice age. Recall that between 15,000 and 5,000 years ago, the sea level was increasing by more than 1 meter per century (about 100 meters during the period), much faster than today, and a comparable decrease of the sea level may be expected in the opposite parts of the cycles.
When we look at these long-term developments, one must realize that while the sea level may be a great proxy for the global temperature, measuring the external drivers only, the coefficient relating the warming/cooling and the sea level rise is changing after millenia. When there were many more continental glaciers, the sea level arguably responded to the changes of the temperature much more intensely than today - because there was a lot of continental ice ready to melt or grow.
For the most recent 6,000 years or so, essentially only Greenland and Antarctica contributed to the sea level rise by ice melting. The heat expansion of water in the oceans is a contribution to the coefficient that doesn't change much.
Let me say that I do believe that the increasing CO2 concentration does contribute to the slower underlying trend. But it is clearly not the only (or dominant) contribution because the sea levels have been changing equally or more rapidly than they are today, long before we were producing lots of CO2.
Luboš Motl v 8:00 AM
Share