Holdren: I will return us to the Age of Smog

As AP and others reported, Obama's science advisor John Holdren wants to reintroduce smog to the atmosphere.

The reason is that by living in the age of global warming, we are driving a car with bad brakes toward a cliff in the fog. He repeated this "rigorous" sentence twice in 30 minutes. ;-)

Well, it's clear that if we ever had a problem, all options would have to be considered, and this set of strategies would be a natural one to manipulate with the temperature. It would probably be cheaper than fossil fuel caps by orders of magnitude, too.

However, it is strikingly obvious that there doesn't exist a tiniest sign of a negative consequence of the hypothetical global warming. So why would we be returning to those dirty times?

In Communism, capitalism, and environment, I explained how horrible the pollution used to be in the industrial communist cities. We were not talking about CO2 which is a completely innocent gas - but about SO2, SO3, NOx, CO, NH3, ozone, particulate carbon, and similar stuff. Children began to be slightly sick. Acid rains were killing forests. Weeks of schooling outside the cities had to become mandatory. 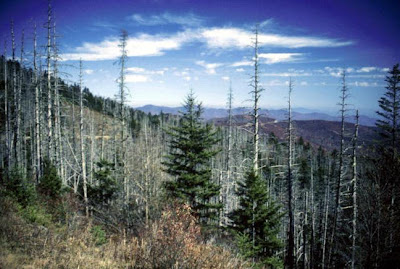 Ore Mountains (Erzgebirge / Krušné hory) on the heavily industrialized EastGerman-Czech border at the end of the 1980s (the end of the communist era). Acid rains did the job. Today, the mountains are thriving again.

Capitalism cured all these things. People didn't want to live in a contaminated environment and they actually became able to influence whether their environment is healthy. Unnecessarily dirty technologies - whose main goal was to fulfill communists' arbitrary and absurd 5-year plans - have disappeared, useless portions of the heavy industry were reduced, affordable gadgets to clean the air coming out of plans could have been bought, and the pollution decreased by an order of magnitude.


By its characteristic partial steps, capitalism automatically and naturally increased the concentration of technologies and habits that were mostly useful for the humans - and others whom humans care about - and reduced those that were harmful.

It is not surprising that this striking contrast between capitalism and communism may work in the reverse, too. When a hardcore 19th-century-style communist becomes too powerful in a previously advanced and healthy capitalist country, it may indeed become possible to transform the country into an underdeveloped polluted communist chimney.

It is clear to me that some people should be thinking about the causal mechanisms in the atmosphere and the possible technologies to influence the climate and/or the weather, in one way or another. But we should actually be comparing the costs and benefits. A dirty atmosphere is surely much worse than half a degree Celsius of an additional warming. Even five degrees Celsius would be more pleasant than the return to the decades of smog, to the age of relatively unknown chemicals and particulate matter filling the atmosphere. In fact, five degrees Celsius of warming could be better than nothing, too.

The idea that we should actually be using similar technologies at a global scale in the next 20 years or so is utterly absurd. There is no problematic global warming, it is far from clear whether the climate will be warming in the next 20 years, there are no tipping points, there are no critical values of the CO2 concentrations where problems suddenly begin - all these concepts are just fantasies being invented to spread fear among the stupid people, to promote dirty chimney communism, and to increase the power of those who want to return us back to the 19th century and beyond.