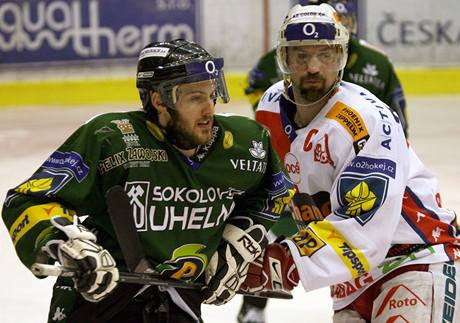 At the end, Pilsen lost to Slavia Prague in the semifinals. However, our Western Bohemian rivals from Carlsbad, the well-known spa town (hotels), managed to defeat Slavia Prague in the finals. In the decisive match, they transformed a hopeless 0:3 score to 4:3. The Carlsbad players are nicknamed "the Russian bitches" by the melodic Pilsner fans, due to a high influence of Russian businessmen in that town.

The sponsor of HC Energy Carlsbad are the unions at Sokolovská Uhelná, the brown coal joint stock company from the nearby town of Sokolov. It produces 10 million tons of brown coal annually. While it used to be the symbol of the degradation of the environment near the Czech-EastGerman border during communism, it became one of the Czech companies with the highest investments to green technologies (not only the players' outfits): 4.5 billion CZK since 1994 (USD 1 = CZK 20 today).
Ore Mountains have been regaining their health for quite some time. Even though the local brown coal contains a lot of toxic stuff, including uranium, the company seems to be pretty clean these days - unless you're one of the loons who consider CO2 a pollutant.
Luboš Motl v 5:37 PM
Share