According to Google News, there are 24,000 articles in the last 30 days that talk about swine flu, surpassing 24,000 articles about global warming. One day later, swine flu articles doubled to 50,000+.

Warning: this cartoon is irrational because you can't get infected by eating pork.

Swine flu makes some sense as a threat. It is actually killing people and pandemics have occurred many times. However, empty threats have been frequent, too. Bird flu has arguably been an overhyped threat, too: only 257 out of 421 infected people were defeated by avian flu. What do you think about the number of people who will be killed by swine flu by the end of 2009?


Also, see another poll why the flu only kills Mexicans - in the article French germophobia rejected.


So far, only 149 people have died and all of them lived in Mexico. (Today in the afternoon, Mexico City was hit by a 5.6 earthquake, too.) Moreover, it is conceivable that anti-viral drugs will work against the disease.

However, don't be afraid of high figures if you intuitively find them expectable (I don't): the Spanish flu pandemic (1918-1920) has killed 40 million people and millions of people died around 1957 and 1968, too.

The previous poll was one about the success of Pen Hadow's Arctic expedition to the North Pole. By the way, the resupply failed today due to low cloud cover. The explorers may face 36 hours of a huge storm, possibly bringing them closer to the ultimate sacrifice. 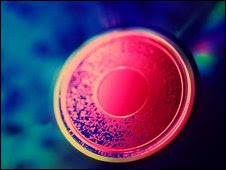 By the way, the story about swine flu is only the second most read story on the BBC server. The number one story is about the new micro-holographic optical disc that is visually similar to ordinary DVDs but it can store up to 500 GB of data. Click the image for the story.
Luboš Motl v 12:41 PM
Share