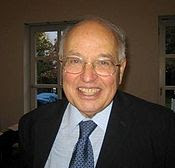 Sir Michael Atiyah, one of the most influential 20th century mathematicians, is celebrating his 80th birthday tomorrow. Congratulations!

See The Herald to learn about the Atiyah Fest...

Although he has been a mathematician, his results - especially those in algebraic topology - have become essential in modern theoretical physics in general and string theory in particular.

The most well-known result is the Atiyah-Singer String Index Theorem, proved in 1963. It is often called simply the "Atiyah-Singer Index Theorem" although this short name doesn't quite reflect the depth of the result - i.e. its proximity to the most fundamental mathematical features of our string-theoretical Universe.

Sir Atiyah has also co-authored a famous paper with Ed Witten on M-theory on manifolds of G_2 holonomy, one of the cute 100-page papers that I couldn't have resisted to read, and a related, shorter, and comparably famous paper with Maldacena and Vafa about the M-theoretical counterpart of Calabi-Yau flop transitions.

His work on K-theory turned out to be important in the physics of D-branes. The ADHM construction, of which he is the alphabetically first co-author, was able to understand how D0-branes dissolve within D4-branes and how to describe the space of instanton solutions in an alternative way - long before this trick was needed or understood by the physicists. Consequently, many of his findings may be viewed as prophesies that became physics long after Atiyah saw their importance.


The index theorem and string theory

Because a lot of misinformation and vitriolic denial is being promoted by the stinky sweepings of the blogosphere that a rapidly dwindling (see top 3 string theory blogs) but unfortunately still nonzero number of people keeps on reading, let me recall why the Atiyah-Singer String Index Theorem is so closely linked to string theory.

In general, the theorem allows us to calculate certain analytic data - the indices i.e. sums and differences of the numbers of independent solutions to differential equations of various kinds - in terms of topological data about the base manifold, e.g. the Betti numbers or the number of holes in the manifolds.

This topological interpretation and derivation of analytical or physical data (or the opposite procedure) is one of the main points of perturbative string theory (and, arguably, not only in the perturbative one). Also, string-theoretical applications of the theorem form a dense subset of the space of all applications of this theorem. As all theorems in mathematics, it is more general than its main physics application. But in some sense, the overlap is so substantial that it makes sense to identify the theorem with its explanation and interpretation within string theory.

The most important special example of the theorem is the classic Riemann-Roch theorem. If you open Green-Schwarz-Witten's textbook on Superstring Theory, volume 1, page 162, you will see that on a real two-dimensional Riemann surface, the number of independent moduli B_g and the dimension of the group of conformal isomorphisms C_g (both of which can be written as the number of zero modes for various tensors, namely the conformal ghosts and antighosts, as can be easily seen) satisfy

The right hand side is proportional to the Euler character (it's equal to 3/2 times chi) which can be calculated from the integral of scalar curvature. This result is crucial for the consistency and non-vanishing-ness of loop diagrams in perturbative string theory - and its validity may be naturally proven by string-theoretical methods, too.

In volume 2, page 372, of the same GSW textbook, you find out that the index of the Dirac operator in 4k+2 dimensions can be calculated from the theorem, too. It's no coincidence that the second simplest example after "k=0" deals with "k=1", i.e. with six-dimensional manifolds. While the "k=0" case was essential for the string world sheet, the index of the "k=1" i.e. "d=6" Dirac operator is important because it determines the number of generations of leptons and quarks in the conventional compactifications with 6 internal dimensions (6+4 = 10). They are given in terms of the Euler character - or its generalizations in the presence of additional stringy physics.
Other generalizations involve signature indices and/or separate holomorphic/antiholomorphic exterior derivatives. A lot of work extending results of Atiyah and others has been done by Witten. They can be embedded into string theory. In many cases, the truncation to topological string theory is enough to see the whole structure.


Mathematics as prophecy in physics
Once the true physical meaning of these mathematical results - whose depth was always manifest to the big thinkers - is appreciated, one can use the other knowledge of the physical application (string theory) to search for the natural guesses how to generalize the results and estimate their importance. The interactions between mathematics and physics are very subtle, however.

So mathematicians often find generalizations whose physical meaning seems obscure or non-existent at the moment of the mathematicians' brainstorm.
However, if the mathematicians are deep, it often happens that the result is viewed as an extremely physical one a few decades later. It was surely also the case of the Atiyah-Singer String Index Theorem that appeared in front of their eyes five years before string theory was officially born in physics - and almost 20 years before the relevant mathematical methods became common in physics calculations (especially the modern BRST quantization of string theory; and derivations of low-energy physics of string theory).

Mathematicians are often ahead of their time. But those 20 years are close to the upper limit at which the mathematician can still feel genuinely happy about her or mostly his work. If he or she is a century ahead of the physical world, I am afraid that he or she may remain misunderstood.