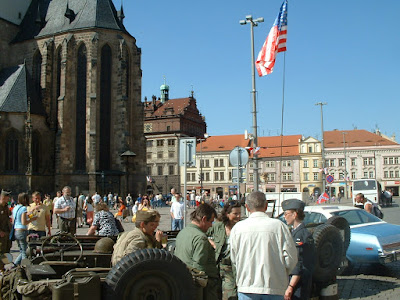 Click to zoom in. In the background, you can see the St Bartholomew Church and the Renaissance City Hall. In the foreground, there is a U.S. military vehicle.

Pilsen is in the middle of the Liberation Festival i.e. celebrations of the 1,000,000th binary anniversary of the liberation by the U.S. army. This is already the 20th free celebration of this event but the excitement behind it is still spontaneous: you know, 40+ years when people were not allowed to say who has freed our city has made a difference, too.

Some direct links to photographs:
Unfortunately, I completely forgot to see the Strykers and all those Jeeps... You can browse them pretty conveniently. Press F11 for full screen. You may find the SNAP previews (point at links, don't click) useful, too.

Thanks, General Patton et al. (His grandson, George Patton Watters, who was stolen a beer at the airport after the festival one year ago, is happily attending the event.)

By the way, after two painful losses against Canada and Finland, the Czech team badly needed a victory. Today, we had to face our Slovak brothers, a pretty strong team. But we beat them 8:0. Poor guys! ;-) There must still be something psychological about these disproportionate victories against them.


The Czech team may still lose the quarter finals. However, we would have to lose the match against Belarus - the country whose president won't visit Prague because Václav Klaus made it clear that he wouldn't shake his hand or invite the stuff to the Prague Castle ;-) - and Norway would have to defeat both Slovakia and Canada. The combination of the conditions seems somewhat unlikely to me but unlikely things sometimes do happen.
Luboš Motl v 6:34 PM
Share