In one hour, at 6 p.m. Prague or Vienna Summer Time, Austrian science minister Johannes Hahn (Christian Democratic "People's Party") is going to announce that his country will leave CERN by the end of 2010 because it is running out of money and because Austria wasn't visible enough at CERN.

While the second justification sounds partially true (Austria must feel jealous relatively to France and Switzerland), the first argument is pure crap (Austria only contributes less than 16 million - not 20 million - euros per year, not to be confused with billions!). And the timing seems bizarre, too.


Among other things, the decision shows that the national identity continues to be way more important than the continental identity in Central Europe. Well, the remaining time could still be enough for Austria to co-discover SUSY or at least the Higgs boson but it's shocking news, anyway.

Well, the bad position of subnuclear physics in Austria is not really that surprising.

After all, Austria is the country that has also banned nuclear power plants and that is causing a lot of trouble to countries that are more inclined towards modern technologies such as Czechia: see Nukes: Czechia vs Austria. So the high-energy experimental research in Austria is going to drop below its counterpart in Bulgaria. ;-)

If you want to see the first journalistic reaction, here it is:

While this idiot may be right that Austria is not a leader in the field, his conclusion that it means that particle physics is a dinosaur shows a serious lack of his brain activity.

And let me say one more thing: a reason why sponsors pay money to science is that they want to own the scientific stocks, to be a part of the scientific progress, even if they can't do the top research themselves. I am sure that this is what Kavli and Lazaridis have in mind, too. It's obvious that scientists should be receiving the resources according to their quality and the Austrian experts are not necessarily the best ones in the world.

However, the money going to projects should be decided according to the quality of the projects. Experimental particle physics is the queen of experimental physical sciences and CERN is going to become the world's top place where it is studied. 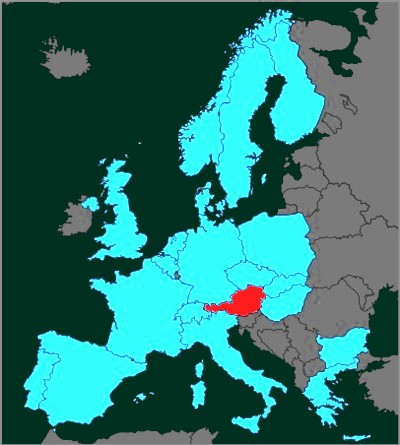 The new map of CERN member states. The red pandemic can unfortunately propagate around the map if Austria becomes a role model for others.