A battle against climate alarmists 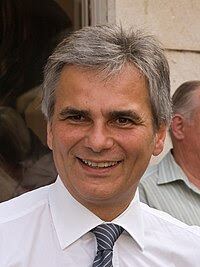 Because Werner Heisenberg and Richard Feynman have been gone for quite some time, the closest approximation is Werner Faymann, the current Austrian Chancellor (Social Democrats).


He said that the exit from the top discipline would harm Austria too much. Unfortunately, it is Hahn who will probably make the final decision so there's a risk that the Chancellor's voice will not be heard.

The Kurier article makes a very characteristic observation about the typical enemies of particle physics in the Austrian academic circles. Well, the most vocal ally of Hahn's decision has been Ms Helga Kromp-Kolb, a top Austrian climate alarmist and whackadoodle. Click the link to see that she is one of the media types that most scientists generally despise. And no, TRF doesn't recognize her doctorate, so the name correctly began with Ms.

She cackled that there were more important things than particle physics to be solved. The Kurier informs that people like her would like to erase many more research expenditures besides hard sciences and that she justifies the destruction of the advanced civilization by "climate change", "depletion of energy", and the "crisis". It may be argued that similar pseudoscientific, uncultural, fearmongering fraudsters - like Al Gore himself - were the main force that killed the Superconducting Supercollider in Texas.

The pockets and banking accounts of these immoral people have yet to show the first signs of the "crisis".


On the other hand, Austria's CO2 output currently exceeds the targets by 32% or so, despite the rich natural energetic resources in the country. The fraudulent scheme of Kyoto will probably force it to pay billions of dollars per year: Ms Helga could save these billions for her Vaterland if she helped to remove her country (and others) from the grand scam. It's not clear whether "saving" 16 million euros a year for one of the most prestigious scientific disciplines is the right way to go.

Dr Ben Sarter is a 1998 McArthur "genius" laureate (USD 270k) for his work claiming that men are destroying the planet.

This is the latest lecture by him, optimized to educate a new generation of Al Gores and James Hansens. The latter two have been learning from similar ingenious and accurate documentaries. In Dr Santer's words, the program below contains "all about global warming", at least everything that he or people at RealClimate.ORG know today.