Fifty papers have been written about the Hořava-Lifshitz gravity (NYU about it). Aside from the first author - Petr Hořava - and the most recent group of authors, everyone in this list seems to have gotten carried away.

Those 48 papers just seemed to have joined a bandwagon, without thinking about the real issues. They knew that someone would refer to them, whatever they write, so they often (incorrectly) connected the new bandwagon to their older work and/or offered solutions that would only be interesting if the theory actually worked - and produced General Relativity at long distances out of a Lorentz-breaking renormalizable UV starting point. But does it?

by Christos Charmousis, Gustavo Niz, Antonio Padilla, Paul M. Saffin has returned to the primary question, namely whether such an unusual UV starting point can produce Einstein's theory at long distances. By realizing that the answer can be Yes or No and by quantifying the general problems explained in my previous two articles about this topic, the authors answer the question. The answer is No.

Petr assumed that the full spacetime diffeomorphism group can be broken down to a subgroup and the correct long-distance limit can be reproduced, anyway. This is, of course, a very bold assumption because the diffeomorphism symmetry plays a very important role in General Relativity.


The diffeomorphisms are closely linked to the equivalence principle and are responsible for the reduction of a large number of excitations down to the two transverse physical polarizations of the graviton. This reduction is not only an aesthetically pleasing sign of the power of the underlying principles and symmetries of Einstein's theory. It is also an experimentally supported proposition. 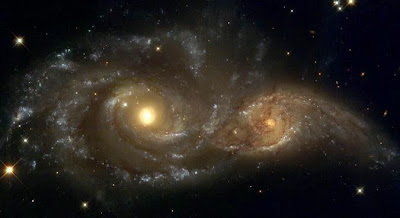 The 1993 physics Nobel prize was given to two men at Princeton who have found a binary pulsar whose frequency is increasing exactly according to general relativity, a theory predicting that this binary pulsar emits two polarizations of gravitational waves and loses a particular and calculable amount of energy per unit time. So if you mess up with the number of physical polarizatinos of the graviton, you are likely to fail, both aesthetically and empirically. 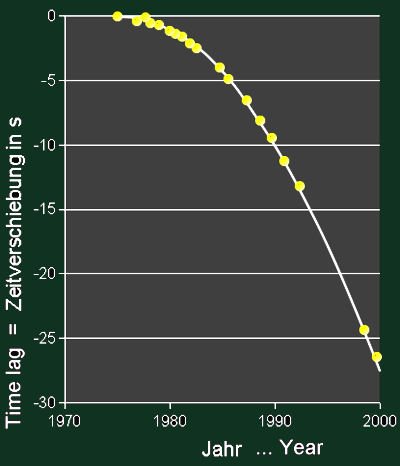 The accumulating negative time lag of the Hulse-Taylor binary pulsar - that loses energy in the gravitational waves, bringing the two objects closer to one another (and speeding up the orbital frequency): the current period is 7 hours 45 minutes and (very slowly) getting shorter. The agreement between the theory (curve) and the observations (points) is so remarkable that you should better not ignore this confirmation of General Relativity.

There exists a useful, older example what happens if the diffeomorphism symmetry is not taken seriously, namely the Fierz-Pauli (massive) gravity. Use the symbol "h_{ij}" for "g_{ij} - eta_{ij}" where "g_{ij}" is the dynamical metric and "eta_{ij}" is a background profile for the metric (e.g. the flat one). You can write down a quadratic action for this tensor field, "h_{ij}". This action can also have mass terms and interactions. In general, they break the diffeomorphism symmetry which therefore cannot be promoted to a constraint algebra.

You could think that if you send the mass of "h_{ij}" to zero, the theory converges to General Relativity for the right choice of the interactions. However, the Fierz-Pauli theory didn't respect the diffeomorphism symmetry so it has a higher number of degrees of freedom than General Relativity. Massive spin-two particles have five polarizations (a traceless symmetric tensor in 3 spatial dimensions) and the three excessive ones don't disappear. They're still there, they become strongly coupled in the massless limit, and their influence on physics generates lethal effects usually presented as the vDVZ discontinuity.

This discontinuity has both ultraviolet and infrared manifestations. Concerning the ultraviolet ones, we still have ill-behaved propagators for the unphysical modes at high energies, analogous to the Proca field. The infrared problems are more serious and resilient. The corrections to the Newtonian planetary motion (e.g. the Mercury perihelion's precession) disagree with General Relativity.

There exists a nice way to see where this discrepancy comes from. In 2002, Arkani-Hamed, Georgi, and Schwartz updated the Stuckelberg trick. They re-introduced the general diffeomorphism symmetry to the massive theory, by adding additional auxiliary fields (essentially "fake" dynamical spacetime coordinates). In the massless limit, the massive theory reduces to the General Relativity coupled to these new fields. And they're strongly coupled, indeed. Their effects can be nicely isolated and the predictions of General Relativity get damaged.

Charmousis et al. use the same trick to analyze the Hořava theory. The result is completely analogous.

The new fields - the fake dynamical spacetime coordinates - become strongly coupled in the hypothetical long-distance limit, lambda=1 (in fact, only the temporal one does, but that's enough). This strong coupling means that the coefficient of the derivative terms in the equations becomes infinitely higher than the coefficient of the interaction terms (without derivatives). The unwanted new modes change the physical predictions by a finite amount.

Charmousis et al. argue that this problem is almost certainly shared by all models you could imagine that are based on Hořava's general idea of a diff-breaking Lorentz-violating UV starting point.

Aside from this general, resilient problem, the authors also discuss a smaller problem with theories based on the detailed balance. Hořava's theory is non-relativistic so there are many more terms one can add to the action. To replace the constraining power of the Lorentz symmetry, Petr imposed another principle, the detailed balance conditions.

Detailed balance is a condition that relates a dynamical system in "p+1" dimensions to a static system in "p" dimensions. The "forward and backward" transition rates of the higher-dimensional theory are required to be equal, up to the ratio of equilibrium probabilities of the two states. In practice, it means that the action of the p+1-dimensional theory can be generated by an action/potential of a p-dimensional theory, while the terms with the time derivatives are required to be the most standard "velocity squared" terms (for all fields) that you could imagine.

Well, there exist mathematical similarities between quantum field theory in "p+1" dimensions and statistical physics in "p" dimensions. Both disciplines use some functions, integrals, and they even know the concepts of the Renormalization Group that apply in both cases. Still, I think that this relationship cannot be viewed as a deep physical principle to constrain theories or as a complete identification of two theories that would be analogous to dualities. The resulting condition on the kinetic terms seems arbitrary and contradicts other, more well-established and motivated conditions that normally link the temporal kinetic terms with the spatial ones, especially the Lorentz symmetry. Also, the lower-dimensional theory is not treated as a full-fledged quantum theory.

In the case of the Hořava gravity, the detailed balance was seen to be incompatible with the proper Schwarzschild-like, spherically symmetric solutions by Lu, Mei, and Pope. The right solutions were not obtained and in the promising ones, functions that should have been calculable remained unconstrained. The authors decided that it was necessary to abandon the detailed balanced condition. But as Charmousis et al. found, it is not sufficient.

Once you lose this condition, you are back in the world of a generic non-relativistic model building with lots of adjustable terms. A huge fine-tuning is surely necessary to obtain a Lorentz-invariant infrared limit but it is probably not sufficient.

Miao Li and Yi Pang wrote another paper about a "trouble" with the Hořava-Lifshitz theory one day later. They claim that the phase space has either zero or an odd number of coordinates.

They're smart guys but I am kind of puzzled by the counting. I thought that the detailed balance guaranteed the existence of "natural" momenta for each quantity. Moreover, coordinates without momenta don't have to mean an inconsistency. For example, the heterotic string has chiral bosons on the worldsheet whose zero modes have no momenta: they are forced to take eigenvalues in an even self-dual lattice. This could be done even for an odd number of unpaired coordinates except that the self-dual lattice couldn't be even.

You may want to follow Miao Li's blog (autom. English) if you want to hear from him.

I think that this episode is just another manifestation of the crucial role played by the diffeomorphism symmetry and the local Lorentz symmetry in the context of General Relativity and its extensions. There exist good theoretical reasons why these principles should be obeyed exactly. And in fact, there exist empirical reasons, too.

String theory is the only framework that goes beyond the classical theories written down by Einstein around 1916, that respects the corresponding consistency conditions in this extended framework, and that respects these principles exactly.

Of course, you can return to the "anything goes" way of thinking by saying that both theoretical (constrained theories without much fine-tuning, high symmetries, elimination of perpetuum mobile devices, absence of ghosts) as well as empirical arguments (precession of the Mercury perihelion, bending of light) should be ignored during the search for the right theories. But I am personally not interested in the mental exercises in which both deep theoretical arguments as well as empirical data are being ignored.