Gigapixels from Obama inauguration: a contest 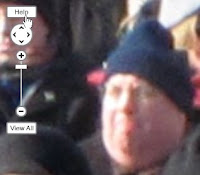 A seemingly simple task is ready for you: find this guy on the following photograph from the Obama inauguration:

To simplify ;-) your life, the picture can be zoomed in. The problem is not infinitely hard: only slighly over 1 million people attended the event. With a good logical analysis of the angles and lightning, you have a chance to find him after some time!

Obviously, I wrote this comment because a similar dictum - think, think, think, and try to use all the information you have - should apply to the research of the stringy landscape, too.


Once you find the Gentleman, write a fast comment describing the gadget that the woman on his left side - i.e. the right side on the picture - was using. If someone had already solved this problem before you, move your eyes further to the right and slightly up (to the Northeast) and identify the intense color of a fur hat of another woman over there.

If you care, this photograph was prepared with a 1,474 megapixel camera and believe me, the comma is not a decimal point. ;-)

Hat tip: CIA (well, not really: the picture was created by an amateur)
Luboš Motl v 11:29 AM
Share