That's the summary of nine most recent reports that "global warming will be twice as bad as expected". The newest wave of nonsense in the media was sparked by an MIT article:

These prophets wrote in Journal of Climate that the warming in the next 91 years will exceed 5 °C even though the real figure is around 0.3 °C - 1.0 °C.

Shift/click the cartoon to zoom in. Via Clifford Johnson.

To make it really obvious that the work is addressed to the superficial people in the media rather than scientists, they have included this "climate roulette" defining your chance to get one warming or another depending on your choice to adopt some "policies": 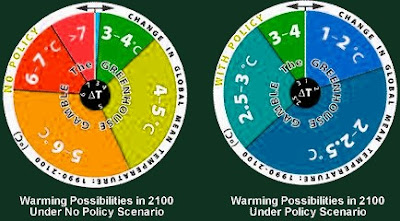 How nice and convincing. ;-) But only for some people.

You can see that it doesn't matter whether a policy is adopted: at any rate, this work predicts a ludicrously and clearly unrealistic warming. What's remarkable is that the media have learned to use the adjectives "more accurate" and "higher warming" as synonyma. In reality, the further a prediction is from those 0.3 - 1.0 °C per century, the less accurate the paper is. 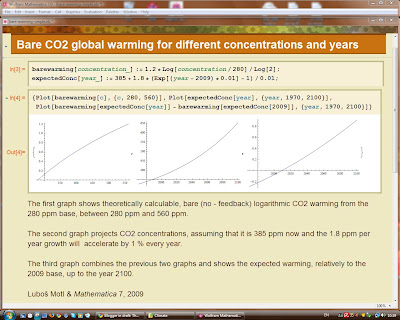 There cannot possibly exist a rational, balanced argument that would generate 5 °C or 7 °C per century. To see why, shift/click the Mathematica screenshot above for the most elementary calculation of the bare greenhouse effect.

The no-feedback logarithmic formula implies 1.2 °C of warming per CO2 doubling. You see that the warming is slowing down as the concentration increases. The second graph shows the CO2 concentration for different years, starting with c=385 ppm in 2009 and assuming a 1.8 ppm/year growth rate that is generously assumed to speed up by 1% every year: this acceleration, while matching the slightly slower acceleration of the U.S. CO2 output, is probably an overestimate because there are signs that the oil production began to stagnate.

Also, the Earth is absorbing an increasing fraction of the "excess" CO2 as the concentration increases which slows the increasing trend of the concentration, a detail that we also generously neglected in the second graph. Nevertheless, this second function is speeding up and it may continue to do so until we really "run out of oil".

When you combine them, you get an approximately linear warming as a function of the year on the third graph. The no-feedback warming between 2009 and 2100 is around 0.8 °C. This no-feedback assumption is compatible with the observed data from the past and there exist very good reasons to think that the actual net feedbacks are negative.

My graphs included above are roughly compatible with the all-time satellite-observed warming (e.g. UAH) that would predict 1.3 °C per century from the lower troposphere but only 0.4 °C per century in the mid troposphere where the warming, according to the greenhouse-dominated models, should actually be faster than near the surface.

Claiming that the warming in the next 90 years will "more likely than not" exceed 5 °C, even though it was negative in the last decade, among other things, and even though there doesn't exist a slightest piece of evidence supporting such an amplification by a factor of six or more, is just preposterous. The authors say that in the past, the CO2 warming was masked by things like volcano eruptions. Except that there has been no major eruption in the last decade while the warming was still non-existent. And on the other hand, the number of eruptions in the future can actually be higher than what we have recently seen.

If many adjustable, uncontrollable ingredients are added into a model, it is easy to shift the result in the "desired" direction by adding a tiny bias into each ingredient. But an unnecessarily complex model is not necessarily a good starting point to get a more accurate result. If one cheats ten times a little bit, the result may be as meaningless as if you cheat "brutally" and once. Also, the cheating divided to dozens of authors may be small. But if all of them cheat in the same direction, the resulting mistake of the paper may be as devastating as it is in the case of this paper.

The people who write this catastrophic stuff are manifestly either crackpots or fraudsters whether they're harbored by the IPCC, the MIT, a mental asylum, or your local prison.

I have done a lot of elementary simulations, assuming different scenarios for CO2 growth, proper nonlinear relationships between CO2 concentration and temperature etc. If you want the Mathematica notebook, let me know. You can't ever get a result that would be worrisome.

But there has been a trivial issue that has confused me: the vertical profiles of the CO2 concentration. Because the CO2 molecule is heavier than N2 or O2, the dominant gases in the atmosphere, it is "localized" in a thinner layer of the atmosphere, isn't it? The potential energy U, appearing in the exp(-U/kT) distribution, is more rapidly dependent on the altitude.

When I assume that the surface concentration of CO2 is 385 parts per million of volume, this figure diminishes with the altitude, implies that the effective thickness of the CO2 segment of the atmosphere is 4.5 km only or so, and the total mass of CO2 in the atmosphere that I get in this way is only 1.45e15 kg, instead of 3.0e15 kg that e.g. Carbon dioxide article on Wikipedia says (among many other sources). I feel that the figure 3.0e15 kg is obtained from the assumption that 385 ppm of volume holds at any altitude which seems wrong to me.

Could you help me? Who is right? Or is 385 ppm averaged over the whole atmosphere in some way, instead of describing the surface?