James Hansen hopes that the cap-and-trade legislation will fail in the U.S.:


It's getting hot in here
Climate Depot

Of course, Hansen's reason is that he prefers a more radical system to screw the industrial civilization. Nevertheless, the lawmakers should think twice whether they will actually please anyone if they endorse this counterproductive bill.

Meanwhile, the Catlin Arctic Survey is completing the first week in the tent. They're mentally and morally devastated, bored, and hungry. 1,000 kcal per day and per person is not that much: it's like the 300-gram package of Haribo Color-Rado that I just ate. ;-) They normally receive 6,000 kcal per day per person. Martin Hartley's toe is stinking badly; it is combining the natural biochemical processes with frostbite. 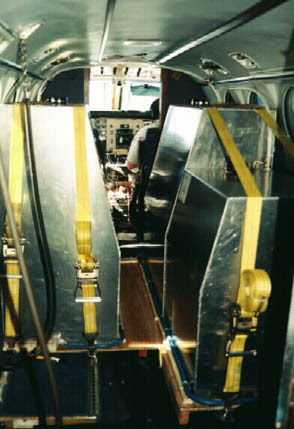 Their dedicated aircraft, a Twin Otter, was supplemented with Ferry tanks, similar to the picture on the left side and containing additional fuel. That allowed the engine to skip the refueling stop in the middle of the flight - which couldn't be realized due to the continuing bad (=cold and cloudy) weather. However, the extra tanks also makes it impossible to transfer any humans besides the pilots. They also made the landing maneuver on ice more difficult; nevertheless, the pilots managed to land a few hours ago, instead of being satisfied with an airdrop: food and cooking fuel for bare survival.

The team has forgotten about their scientific mission a few weeks ago. Pendrill Hadow hasn't made any drilling for quite some time and all the gadgets have been broken. On the other hand, the team is successfully contaminating the Arctic Ocean with fuel drums: all green NGOs are silent in this particular case. The Catlin Arctic Survey is a good toy model of the cap-and-trade system, indeed. The green people are the pond scum of mankind (thanks, Fritz).


They currently plan to give up the expedition around May 24th.

The respect for swine flu has apparently become a part of ten commandments. Mr Jiří Dlabaja, a reporter of Czech TV Nova, the #1 private station in Central and Eastern Europe, has posted a funny video making fun of the swine flu hysteria. He and his colleagues imitate some snorting piggy sounds: this noise is the answer to the question what they're working on, showing that all journalists are effectively forced to cover this "story".

Well, the sourballs who have fired him may be unable to imitate pigs on the video but they are pigs from the moral viewpoint. 87% of Czechs agree with me that it was wrong to fire him. It's nice to see that 26 people have been killed by this virus but billions of people have died during a few recent decades because of other reasons, including millions of casualties of "ordinary" flu.

The idea that "swine flu" is one of the most important problems of mankind is a media-driven nonsense and nonsense deserves to be humiliated.
Luboš Motl v 9:51 AM
Share