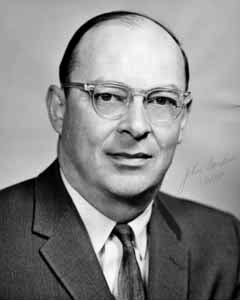 John Bardeen was born on May 23rd, 1908 (101 years ago), in Madison, Wisconsin, to a family of a professor of anatomy and a mother who was diagnosed with cancer when he was twelve. He had four siblings.

His father tried to hide the mother's illness, so John was shocked when she died. A new mother, namely his dad's secretary, wasn't accepted by the kids as warmly as expected.

John chose engineering because he was annoyed by the academic pomposity of his father's environment - and for a while, he has worked as a geophysicist for an oil company. However, the genes and the education at home couldn't quite be eliminated so he eventually ended up in a maths and physics graduate program at Princeton. ;-)

Nevertheless, he remained a very modest, ordinary guy who liked to cook and organize picnics for his neighbors and play golf: that's a major reason why the media largely ignored him. That didn't prevent him from earning two Nobel prizes for inventions and discoveries whose importance can't be overstated.

In 1956, he shared the award with Shockley and Brattain as a co-inventor of the transistor, the fundamental building blocks underlying the whole modern world of electronics. They invented the device because they were ordered to do so in 1945 - to replace the fragile glass vacuum tube amplifiers by something more robust - by Bell Labs where they worked.


In 1972, he shared the very same award with Cooper and Schrieffer for their BCS theory of superconductivity. His insights in this subdiscipline are also important in practice - e.g. in NMR and CAT scans - but they're also critical for condensed matter theory.

Their 1957 BCS papers explain that the electrons start to form pairs because of the phonon-mediated attractive force. These bound states are bosons that get condensed, they're separated by an energy gap from the single-electron excitations, they imply the existence of the Meissner effect, and predict various critical temperatures and magnetic fields.

It's all nice. What I find bizarre is that the BCS papers don't even mention the 1950 Ginzburg-Landau theory of superconductivity - one that you could describe as the U(1) Higgs mechanism (long before Peter Higgs's papers) applied in the condensed matter context.

Bardeen is one of a small number of double Nobel prize winners in the history of science and also a guy who disproves the general preconceptions about the great scientists who must be "crazy". He died in 1991, at age of 82.

Microsoft has been thinking about a better name for its Live Search. Finally, they decided it is Kumo.

Kumo.com may start to operate next week and it will bring some new, improved features to the current Live Search. It's not hard to see that they have made a one-bit mistake: the correct name should have been Lumo so that the abbreviation "l" could be kept from the Live Search. For a few million bucks, I would have allowed them to use it.

Kumo means "spider" or "cloud" in Japanese, referring to the spidering of the web and cloud computing. "Spiders" are ugly while "clouds" are obscuring the truth.

On the other hand, Lumo means "charm" or "enchantment" or [not only Feynman's] sum of many histories in Finnish or "light" in Esperanto. "Charm" is beautiful while "light" makes things clearer. Let's admit, Lumo sounds lovely while Kumo sounds Kavli or worse.

Based on the information above alone and no other data, infer and describe which hypothetical name should have been given to the search engine - Kumo or Lumo? :-)